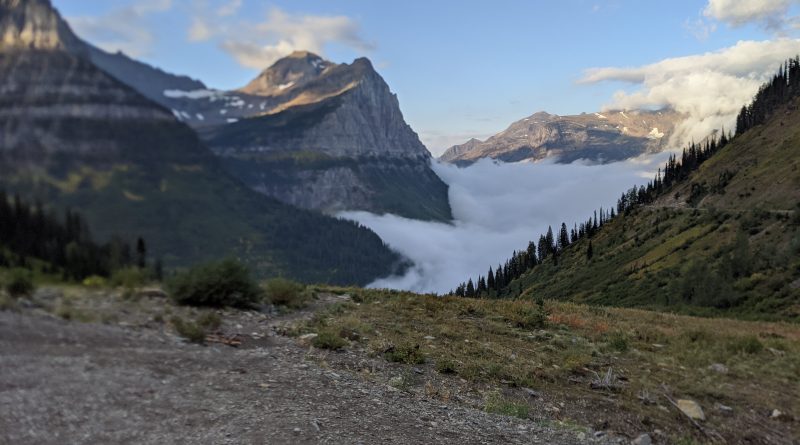 2020 has definitely been an interesting year with the pandemic going on. With some college football games being postponed around the country, limited attendance (if any) at games that do occur, and with general health in mind, I made the decision to take a road trip through Montana and Northern Idaho instead of going to my usual fall games. One of the main places you could see the effects of the pandemic was at the airport. My flight took off out of terminal D at DFW airport, which is mainly used for international flights. The first major thing I noticed is I was literally the only person in line when I went through security. After making my way through to the terminal the majority of stores and restaurants were closed. Again, I’m assuming it was more noticeable here because it was the international terminal, but it was still a strange site.

I will be breaking my trip down into two blog entries. Today’s entry will review the first half of my trip starting in Whitefish, through Glacier National Park to Great Falls, and down to Bozeman. My second entry will cover Helena, Missoula, and Coeur d’Alene, Idaho.

My first stop was to Whitefish city beach. It was a small, serene beach on the north side of town. There were a couple people out in the lake on kayaks and other small boats. It was a great way to start the trip to sit down and relax and watch some of the waves come in with the mountains in the background.

When I researched Glacier, the recommendation was to show up before 8 AM to make sure you could find a parking spot at Logan Pass at the top of the mountain. Since it was a weekday morning, off-season, and I arrived to the park at 7:30 I figured I would be good. Incorrect. The drive from when you enter the park to the Logan Pass area of the park is about an hour long. About halfway up you hit the mountains and you end up driving along very narrow roads along the edge of the mountain, which is very scary to someone as scared of heights as I am. If that wasn’t enough, about halfway up there was very dense fog that you had to drive through as well.

But then the fog cleared as you rose above it and I was able to view some of the most amazing views (As seen above). The sky was a very dark blue with the mountain peaks in the background and then the fog you just drove through below you. It was almost like you were floating in the air. Those views made that harrowing drive up the mountain worth it.

Which is good, because the parking lots at the top at Logan Pass were full. You could have tried to wait for a spot to open while more and more cars came up, or you could just turn around and drive back down. Since I had another 5 hours of driving in front of me I decided not to wait and went back down the mountain, which was much less scary on the way down since you were not on the edge of the cliff going down. I did spend some time by the lake near the entrance before I left the park though.

I did not know of CM Russell before visiting this museum in Great Falls. He was a famous painter of Western themes in the late nineteenth and early twentieth centuries. There were many of his paintings throughout the museum showing wildlife such as horses and bison along with Native American friends he made along with the way. There were also painting and sculpture from other artists that were influenced by Russell.

About half of the museum was shut down due to pandemic precautions while I visited, but because of the limited open areas they did only charge half the price which I thought was very fair of them. Outside the museum the original house in Great Falls where Russell lived along with his workspace still exist. There were also several large animal sculptures around the museum as well.

I’m a computer geek. I work in programming and have been around computers ever since I was a kid. That made the American Computer and Robotics in Bozeman a must see for me. It was a fairly small museum that was within a business complex, but they still had a lot of really cool exhibits.

Some of the artifacts included an original Apple-1 computer signed and donated by Steve Wozniak. They also had an original mainframe from the Apollo 11 mission. Another cool exhibit they had was about the Enigma machine that was used during World War II and was the topic of the movie The Imitation Game. If you have any interest in computing history then this is a place you have to visit.

Museum of the Rockies – Bozeman

The Museum of the Rockies is a fairly large museum associated with Montana State University. They have quite a few dinosaur exhibits, some exhibits about the Native American tribes around the Montana area, and some old cars and other items from the early twentieth century. Montana has quite a few large dig sites throughout the state which means there were quite a few exhibits to show. Most of the bones in the museum were from digs within the state.

Just like the CM Russell museum, some areas of the museum were shut down due to the pandemic, but a majority of it was open and there was a lot to see. The place did start filling up by the time I was wrapping up so I would recommend going early to make sure you have the most space during your trip.

Since this is a blog mainly to write about my experiences at various college football stadiums I thought I should at least take a peak inside Bobcat Stadium. Luckily one of the gates was open so I was able to take a few pictures. The stadium was fairly small with a seating capacity of just under 20,000. They have also just started work on a brand new athletic complex on the north side of the stadium that is scheduled to be complete by the fall of 2021.

Whitefish is pretty small town but it has a very lively downtown area with a lot of neat little shops and restaurants. Quite a few of them were closed on Sundays when I visited, but one that was open was Amazing Crepes. They had a pretty large variety of crepes on both the savory and sweet side. They had a couple people making the crepes through the windows of the store which was fun to watch.

I went with the spinach, brie cheese, and basil pesto crepe. It was a decent sized meal and folded very cleanly to make it easy to pick up and eat with your hands. The crepe was tasty with the brie cheese standing out the most. I did not try anything on the sweet side of the menu but their best seller is a mix of dark chocolate and fresh strawberries which I think would make a great filling to one of these crepes.

You have to eat a steak at least once while you’re in Montana and that’s what I had at the Montana Club in Great Falls. It’s a small chain with five locations throughout the state. The decor on the outside and inside of the restaurant was nice. They had a few televisions inside to watch various sports teams. Their menu was quite diverse with a variety of seafood, pasta, and sandwiches on top of the normal variety of steaks.

For my meal I went with the blackberry filet with a side salad and garlic mashed potatoes. The filet was cooked as ordered and the blackberries on top added a bit of tartness that added very well to the flavor of the steak.

Roost restaurant is a chicken restaurant in Bozeman that was recently featured on Diners, Drive-ins, and Dives so it had a lot of good press around it. They had their inside dining closed due to the pandemic, but had a very large outdoor dining section that was open. They have a variety of chicken meals including sandwiches, chicken strips, and even chicken and waffles.

I like my food spicy so I went with the Nashville hot chicken strips with okra and macaroni and cheese. The chicken strips were fairly large and had a great kick of heat with it. It came with a sauce called come back sauce that added a great balance to the heat of the chicken as well. The okra and macaroni were both flavorful, but I felt the size portions of the sides were quite small for the price of the meal.

Wheat Montana is a bakery popular in the state of Montana. They have bakeries and delis in cities throughout the state. But the main Wheat Montana facility is located just off the highway near the small town of Three Forks.