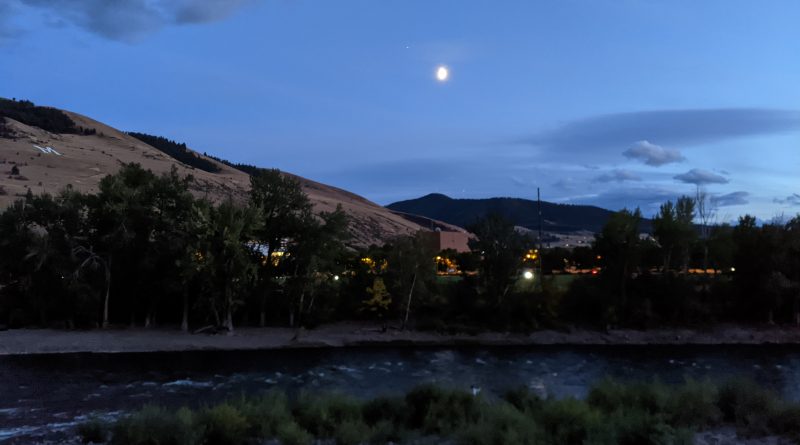 Knowing I was going to visit the campus, I reached out to the athletic department at the University of Montana to see if I could check out their stadium. Their staff responded back and was very generous in meeting with me and letting me in to take a peak. The stadium was pretty larger for an FCS school with a fully enclosed stadium. They had a large scoreboard in the South end zone and the mountains in the background. I would imagine this would be a great place to check out a game, especially in the evening as the sun is setting.

With the large amounts of wildfires through the West, there was a large amount of smoke in the air during portions of my trip. The place this was most evident was during an early morning trip to Mt. Helena. This area is located on the West side of town and had a great overview of the city. With the sun up for just around an hour when I arrived the smoke in the sky and the orange of the horizon led to a picturesque view of the city.

I always check out state capitol buildings when I have a chance on my journey through new states. Montana’s capitol was in a more quaint area of the city than most capitol building are. There was plenty of green space and a lot of parking around the area. In front of the building was a large Montana shaped flower bed that they update every year along with a couple large statues. They were doing some construction on the building as well.

Inside things were fairly quiet and there were no formal tours available. They also had the Senate and House chambers closed down so I wasn’t able to check them out as much as I usually do. But they did all have windows so you were able to check out the rooms. The dome was very pretty from the inside as well. It definitely was not the best capitol I’ve visited, but definitely not at the bottom either.

The University of Montana is located along the Clark Fork River and was a very pretty campus. The highlights were the wide open areas with the views of the mountain in the background. The closest mountain was Mount Jumbo which features the large M that is a popular place to hike to for an overview of the campus. On the flip side, there was a lot of people hiking and biking along the river trails near the campus as well.

One of my favorite places was the union building. With the large number of trees and shrubs it had an almost tropical feel to it. It had a large food court and convenience store inside along with the campus bookstore. Obviously with the pandemic going on there were a lot of social distancing rules in place and there were very few people around while I visited. But, I would imagine this would be a great place to hang out on campus.

The Garden of One Thousand Buddhas was basically located on a farm about twenty minutes north of Missoula. The name was apt as there were probably a thousand small Buddha statues in the garden, quite a few with a name of someone being honored by it. There was a large statue in the middle of the garden and a small koi pond nearby as well.

I was a little disappointed by this visit. It did seem to be in a bit of disrepair and not very well taken of. It also appeared out of place to just be out in the middle of nowhere with nothing but farm land around it.

There were not a lot of attractions in Coeur d’Alene to visit, but they have an amazing downtown area and a beautiful lake that you can walk along. Along one part of the lake is the Coeur d’Alene resort, which features the longest floating boardwalk in the world. The hotel I stayed was also right along the Spokane river which made to a few fun walks along the shoreline. Although there was not a ton to do, it was a very pretty place to stay and would probably be a fun place to live if you like being outdoors.

Kootenai Falls is located about ten mile West of the town of Libby, Montana. I took the scenic route through North Idaho and down highway 2 to get to the falls and it was well worth going out of my way for. This was a popular spot for the locals as there were many people out fly fishing around the rapids up and down the river. There were also many areas along the river where you could hike. Once you crossed a bridge over a railroad track the trail split in two direction. You could go to the right which would take you near the falls from above which gave you amazing views of the falls, or you go to the right which took you to a large suspension bridge that took you over the river.

My entire trip had breathtaking views but this area was probably my favorite. A lot of that had to do with it was the one area where I actually got to get out and hike the area, but watching and listening to the falls was an amazing experience. Definitely the perfect way to wrap up my trip to this area of the country.

On Broadway is an Italian restaurant located on Broadway Street (Surprise!) in downtown Helena. They had a large assortment of pasta and other Italian dishes. I tried the pesto pasta which is freshly made linguine with prosciutto, diced tomatoes, and Parmesan cheese. The pasta was cooked well and the pesto sauce had a lot of flavor. I did like the texture that the prosciutto added but there was probably a little bit too much on top. The meal also came with a salad that I got with a delicious raspberry vinaigrette dressing.

The Notorious P.I.G. is located in downtown Missoula and is one of the better BBQ places I have eaten at. It took me a little bit by surprise but this was definitely a hidden gem for me on this trip.

I went with the sliced brisket dinner with potato salad and mac and cheese. The first thing I was impressed with is how much food came with the meal. A lot of BBQ places are pretty stingy with their meats, especially brisket, but not here. Even the sides were larger than I originally expected. On top of the size portions, the flavor was great as well. The brisket was very tender and the sauce that came with it (You could choose one of five) had a nice kick to it that added to the flavor as well.

Hudson’s is a small burger joint in downtown Coeur d’Alene that was founded way back in 1907. The surprising thing about this joint is the only items they sale or burgers and slices of pie. No other sandwiches, not even french fries. They even have a limited number of toppings. While I was waiting for my order a couple came in and asked for burgers and fries and were surprised when fries were not an option. Then, they were surprised again when their learned that mayo was not an option for their burger.

As far as the actual burger, they were made fresh right in front of you at the counter. They didn’t even have the beef made into patties yet. They just took a handful of beef and made it a patty as they put it on the grill. The burger had good flavor and was a very good deal for the price ($3.00 for a hamburger, $3.30 for a cheeseburger). I did not try the pie but it looked like they had four or five different types to choose from for dessert.

The San Fransisco Sourdough Eatery is a small deli chain with ten locations, almost all in Idaho. I knew I wanted something quick and easy so decided to try this location close to my hotel. The service at this location was fairly slow since there was only one employee in the store at the time. He was apologetic for being behind but was still friendly.

I decided to try the turkey and pepperoni sandwich. All sandwiches come topped with Swiss cheese, lettuce, tomatoes, onions, and mayo. I went with no tomatoes, and subbed mustard for mayo on mine. It actually was a very good sandwich. They use fresh sourdough bread with a very generous portion of meat and toppings. Then they pop it into an oven for a couple minutes to toast it. This is a place I would definitely eat at fairly often if there was a location near me.

Gelato by the Lake is a small gelato shop located in downtown Coeur d’Alene. They make their gelato fresh every day and have 16-18 different flavors that rotate in and out. They allow you to sample the flavors before selecting which type you want to purchase. I ended up going with the mascarpone pear. It had almost a cheesecake like flavor to it with pieces of pear in it. It was a very refreshing treat and a very fitting shop in the active downtown area of town.

The MacKenzie River Pizza Company is a small pizza chain located throughout Montana. They had a variety of pasta and sandwiches on their menu, but, of course, I had to go with a pizza on this visit. I went with the bear tooth sausage pizza. This comes topped with spicy sausage, onions, peppers, and tomatoes. I had mine without peppers. The pizza was very good, although a little greasier than I usually like my pizza. The dough that was used was a great texture, nice and chewy as I like my pizza. The flavor of the sausage fit in very well with it’s spices. I was also able to save a couple slices to take back to eat later that evening.

With some extra time before my flight took off back home, I decided to have lunch at Sykes, a popular local diner. They were known for a large breakfast menu, but I decided to go the lunch route with the liver and onions which I ordered with hash browns and vegetables. The liver was very tender, but they also topped it with bacon and there was way too much bacon on the dish. I was able to eat around most of it but it definitely took away from the dish for me.

Also, during my entire trip, eating at Sykes was the only time I felt uncomfortable from a COVID point of view. The restaurant was fairly crowded and there was no social distancing inside the restaurant. People were seated at every table with no spacing in between. Also, it appeared that only one employee was wearing a mask while they were working.

And just remember… be on the lookout for the aggressive beavers!