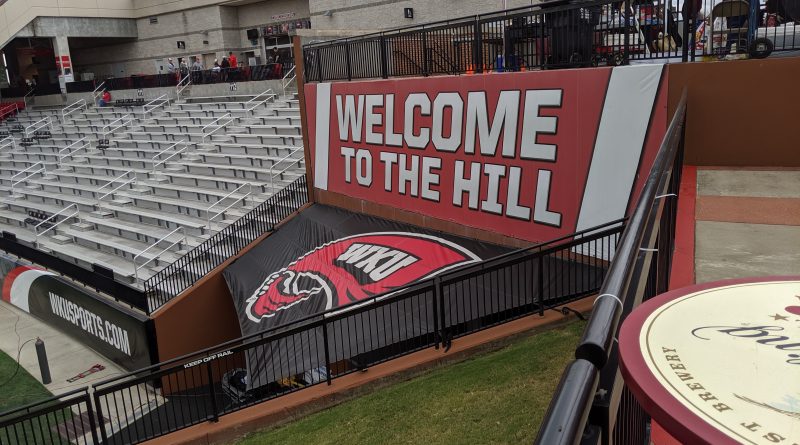 The first half of the game was a very competitive, back and forth affair. Charlotte started the scoring off with taking the opening kickoff on a methodical fourteen play, 75-yard drive down the field to take an early 7-0 lead. Not to be outdone, Western Kentucky followed that up with a twelve play, 75-yard drive of their own to tie the game at 7-7 at the end of the first quarter.

In the second quarter, after a Charlotte punt, the Hilltoppers struck quickly on their second possession on a 69-yard pass from Ty Storey to Lucky Jackson to take their first lead of the game. Charlotte tied the game back up at 14, but Western Kentucky was able to follow that up with a field goal to take a 17-14 lead into halftime.

Houchens Industries–L. T. Smith Stadium is a fairly small stadium, but that is to be expected of a Conference USA stadium. It was homecoming weekend, and Western Kentucky was undefeated in conference play, so I expected a pretty full house, but the stadium was probably less than half full for the game. The attendance was just under 16,000.

The stadium itself, like the rest of the campus, was very nice. There was a large video board on the North side of the stadium and a small, basic scoreboard in the Southwest corner of the endzone. There were no runner boards along the sideline. On the north side of the stadium there was a grassy areas where people could purchase general admission tickets. On the south side there were several tents where it looked like companies could rent them out for the game.

Alongside the normal concessions, there were stands for Sonic, Pizza Hut, and Cinnabon, along with a Hillbilly Grillers in one corner of the stadium that had a small seating area.

As someone that does not follow volleyball closely, I was surprised to find out that Western Kentucky was nationally ranked at #24 coming into this game. Both team had strong conference marks coming in which made me think this would be a fairly competitive match up. The game was played inside Diddle Arena on-campus, which is also home to the WKU basketball teams. As a mid-conference school, the arena was a little smaller, but seemed like a nice arena, with a couple nice video boards inside.

Western Kentucky is known as the Hilltoppers and for good reason. The university sits on top of a hill in Bowling Green, Kentucky. Walking around the campus I was struck by how new most of the building appeared to be. There was a good amount of trees and green areas around as well that gave the feeling of being part of a campus that was actually bigger than it probably is. One of my favorite areas of the campus was the area in front of the student union on the Centennial Mall. There were cherry trees lining both of the mall both leading to a great view of the clock tower in the background. I can just imagine how pretty this area must be in the spring when all of the cherry blossoms are in bloom.

The Kentucky Museum is located on the campus of WKU. The first highlight of this museum was a log cabin right outside. This log cabin was built in the early 1800s and was moved to this location as a way to preserve its history. Inside there were a few exhibits on Kentucky history, a temporary exhibit on basketry, and also an exhibit dedicated to Duncan Hines, who was born in Bowling Green, Kentucky. It was interesting to learn more about his life and how he was responsible for much more than just the baked goods products we find in stores today. He also had a large set of travel guides for places to eat on the road.

Bowling Green is the location where the Corvette is built and so is the perfect place for the National Corvette Museum. The GM plant is actually just across the street from the museum. The museum was very well maintained and had many Corvettes from the early days all the way until today. They also had several areas devoted to auto racing cars. They also have a racing simulator on site for an additional cost and a small cafe.

One of the most fascinating parts of touring the Corvette museum was learning about the history of its infamous sinkhole. On February 12, 2014, a 40-foot deep sinkhole occurred right in the middle of the museum. Luckily, it happened while the museum was closed, but 8 Corvettes fell down into the hole. The museum was closed for 2 years, but reopened with tape on the floor to show where the sinkhole occurred inside. They also had on display the eight Corvettes that fell down the hole, some of which were all but destroyed.

The RailPark and Train museum is located inside a former train depot on the north side of Bowling Green. Along side the museum they also have some former rail cars that can be toured next to the building. Since you could only visit the rail cars during a formal tour and the next tour was 2 hours after arriving, I just did a tour of the actual museum.

The museum had a lot of good displays of the railroad history, including artifacts from the various types of rail cars that were typical during the days of the railroad. They also had a lot of interesting history about how the railroads were used during the Civil War in the 1800s. There was also a small model train display near the front of the museum. I think it would have been interesting to see the rail cars, but the museum itself was worth the visit.

Lost River Cave is a small cave located within the actual city of Bowling Green. It is the only cave within the state of Kentucky where you explore the cave in a boat. The cave actually closes down if there is a lot of rain in the area because it floods. After some flooding early in 2019, the cave was actually closed for 3 months straight. Also, there were very few actual formations within the cave because of all of the water. Although that didn’t make the cave itself overly interesting, the stories that were told regarding the history of the cave and the interesting ways they built out a dam within the cave to make sure there was always enough water to drive the boat through. The guide was very fun and made the trip very worth while.

Chaney’s Dairy Barn is located on an actual farm just a couple miles south of Bowling Green. It is mostly known for their ice cream, but they also had a playground for the kids and a self-guided tour of their machine milking facility that is used in their homemade ice cream. They also have a lot of family events on the weekend to make it a great place to visit. The ice cream also had good flavor, I tried the cherry ice cream with chocolate flakes. This was a fun place to visit at the end of a long day.

Smokey Pig BBQ is a small restaurant on the north side of Bowling Green. It is most famous for being featured on the Food Network for their BBQ style of cooking that is well-known in Western Kentucky. Walking in the employees had a very country vibe to them that fit into the decor of the restaurant very well. I went with a large pulled sandwich with mac and cheese and a vinegar based coleslaw. The sandwich was very good, though I do wish they had a spicier BBQ sauce to put on top outside of the normal sauce that was on the table. The vinegar added a lot of flavor to the coleslaw that made it delicious. Overall, the amount of food that you got for the price made this place a very good value.

Home Cafe and Marketplace is a small cafe that is known for having daily specials and locally sourced ingredients. Depending on what day you go they could have burgers, hot chicken sandwiches, or home style meat and side meals. They also have a couple different types of pizza available each day. On the Friday we were there, the specials includes pot roast, country fried steak, and chicken casserole. I went with the country fried steak with mac and cheese, green bean casserole, and pasta salad. The steak was pretty good, but perhaps a little dry. All the sides were all very flavorful though, especially the green bean casserole. With the wide variety of choices throughout the week, this would be a place that could easily become a local favorite.

Double Dogs is a small chain sports bar with locations in Kentucky and Tennessee. With a full set of college football games on tap, this was a great location to pick. They had a very wide variety of televisions throughout the restaurant. Outside the restaurant was a nice set-up with a small dog house that actually barked when you walked past. Inside there was also a large patio area that opened up to allow people to enjoy the weather on a nice day.

I went with the lunch special, which was the Bo Burger, a typical cheeseburger with grilled onion, lettuce and a special sauce that came with a side of fries. The burger had great flavor and the fries had a nice seasoning to them. This was a location that would be a lot of fun to go to with a group of friends to watch a game. The staff was all very friendly as well.