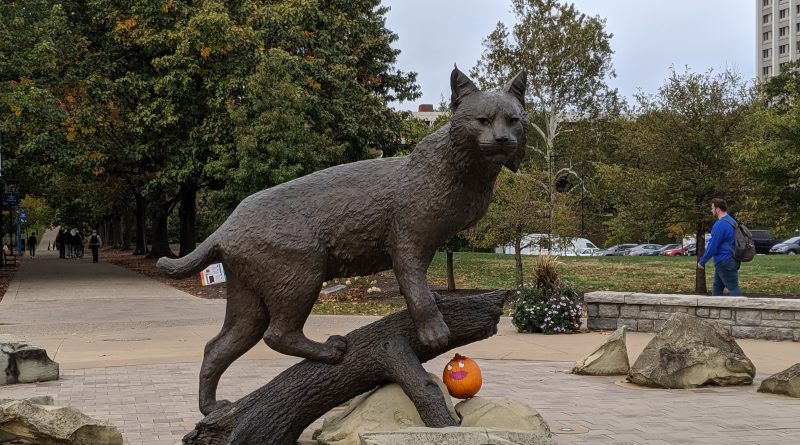 The weather forecast for this game mentioned rain for days leading into this match up. The forecast was very accurate. Although before the game the rain had let up, around kickoff the rain became a downpour and the downpour continued for virtually the entire game. The one saving grace was the temperature was fairly warm so the rain was not super cold and it stayed comfortable.

The offense did their part as well, especially in the running game. Running back Lynn Bowden Jr. ended with 204 yards on the ground and as a team Kentucky finished with 297 rushing yards. After a scoreless first quarter, the Wildcats blew the game open with 3 touchdowns and 22 total points in the second quarter. They were then able to rely on the sturdy defense to coast to a win, 29-7.

Although Kentucky is not considered a powerhouse in the SEC, I was excited about visiting my first SEC stadium. The stadium itself was located on the south side of the Kentucky campus and was surrounded by parking lots on three sides. To me, that always takes away from the prestige of a college stadium. There was not a whole lot of tailgating going on either, but I’m guessing the rain kept quite a few people away. Before the game, Kentucky’s players made their way into the practice facility about an hour before the gates opened to the marching band and cheerleaders who were leading the way.

Inside the stadium, the field was surrounded by a large lower bowl plus a small second deck on the two sides. One thing I noticed was around the field the end zone seating areas were separated by a wall, as were the donor areas from the main seating areas. This means the only way to go to different areas of the stadium were through the concourse areas. That seemed very inconvenient.

There were very large video scoreboards in both end zones along with runner boards around the entire stadium. There did seem to be an issue with the audio system as well as the sound on the south side of the stadium seemed about half a second off the north side. This was very apparent during the National anthem which made it sound like there was an echo.

There was a pretty good variety of food throughout the concourse including Papa John’s, Dippin’ Dots, Chick-Fil-A, House of Cue BBQ, Athenian Grill, and Skyline Chili.

The Kentucky volleyball team plays in Memorial Coliseum on the Kentucky campus. This is also where the women’s basketball team, although separate from Rupp Arena downtown where the men’s basketball team plays. The coliseum was opened in 1950 and still has an old school feel to it. In particular where the very large fans that were on above the seating areas. Although the facility was older, it still had newer touches, especially with the large video screen on one side of the stadium and the runner score board on the other side.

The University of Kentucky campus is located just south of the downtown area. It is a very large campus that I did get lost walking through a couple times. The campus had a nice variety of older building, such as Memorial Hall (pictured below) and new building like the student union.

The student union was one of the nicer unions I have been inside. They had a lot of seating areas, a good variety of food choices, and a large outdoor courtyard. There were a lot of green areas on campus as well. The fact that the stadium was right in the center of town definitely gave it a much different feel than other campuses in smaller towns, including the Western Kentucky campus I visited the week prior.

Kentucky and horses go hand-in-hand as throughout the entire state you’ll find plenty of picket fences with lots of horses through the countryside. The Kentucky Horse Park is a place where these horses are celebrated.

The park has many different shows throughout the day. The first was the Hall of Champions show where several famous race horses were shown, including Kentucky Derby winner Funny Cide. The next was the Parade of Breeds show that showed off several different breeds of horses. Guests were invited to pet the horses after that show. Finally, there was draft horse demonstration that featured a beautiful Clydesdale . It was really interesting to see the difference between all the different types of horses, especially the large size of the draft horses, which in some cases weighed almost a ton.

I always try to take a trip to state capitol buildings when they are close by one of the places I’m visiting. The Kentucky capitol is located in Frankfort, about 40 minutes Northwest of Lexington. The grounds of the capitol had a lot of green space, which fits right in with the country feel throughout Kentucky.

One of the first things you notice inside the capitol building is a statue of Abraham Lincoln in the center. Since Lincoln was born in Kentucky there is a lot of landmarks and displays of him throughout the entire state. Also, if you look up into the dome area, you will notice that the lights in the area change colors, which gives it a unique touch. My favorite room in the capitol was probably the Kentucky Supreme Court room. The entire room is covered in mahogany wood from floor to ceiling.

The Mary Todd Lincoln house is located right in the downtown Lexington area. The story behind Mary and her family was very interesting. The Todd family was right in the middle of the Civil War conflict, with some members of the family siding on each side of the battle. This led to even more strife due to Abraham Lincoln’s influence as President and his marriage to Mary.

The house was in ruins for many years before being renovated and opened as a museum. The tour guide was knowledgeable and had a wealth of stories about the family as well as the history of the house including its time as a brothel.

Wallace Station is located in Versailles, just West of Lexington. It was an interesting place for a restaurant as it seemed to be by itself on a small country road. The restaurant is actually inside an old railroad station that was build in the early 20th-century. That made it fit into its surrounding really well.

The restaurant inside had a lot of deli sandwiches and salads on their menu along with a lot of local baked goods from the nearby Midway Bakery. They also have a dinner special each night after 5 PM. I went with the East Hampton sandwich which was ham, brie cheese, sliced apples, and honey mustard on panini pressed bread. The sandwiches come with chips, but I chose the upgrade to potato salad on mine. The sandwich was very good as the tartness of the apples added great flavor on top of the usual ham and cheese. The potato salad was also flavorful, but seemed like a pretty small order, especially paying an additional dollar for it. But, it was fun to go outside Lexington to visit the cozy location.

Tolly-Ho is a local joint located near the University of Kentucky campus and is very popular with the students there. They are open 24 hours and have a great variety of burgers and shakes. Inside the restaurant they also have a variety of arcade games and pinball machines. Another interesting thing was a small ‘Ho-Mart’, which sold items like candy bars and over the counter medicine inside the store. That actually seemed like a great idea for a college joint like this.

One thing Tolly-Ho is famous for is their banana pudding milkshake. It’s a regular banana milkshake, but has banana pieces and vanilla wafers in it. The shake had great flavor and having the real banana pieces in it made it much better. The Tolly-Ho burger was also very tasty as the beef patty had good flavor. The fries also were crispy and hot out of the fryer. There is a reason why this place is very popular in Lexington and it would be a regular place if I were to live in Lexington.

Bella Forno is a local pizza chain formally known as Crust. It was located in the strip mall located near the DoubleTree hotel we stayed at. There wasn’t anything fancy about the outside of the restaurant, but the inside had a nice feel to it. I went with the dante pizza, which had a spicy sauce, pork sausage, fresh mozzarella, and a balsamic vinaigrette drizzle. In general, I would say the pizza was average. There seemed to be a lack of sausage on the pizza. The vinaigrette was a great touch though. It added a much needed tang to the taste. The meal was also served with a loaf of bread that was very good.