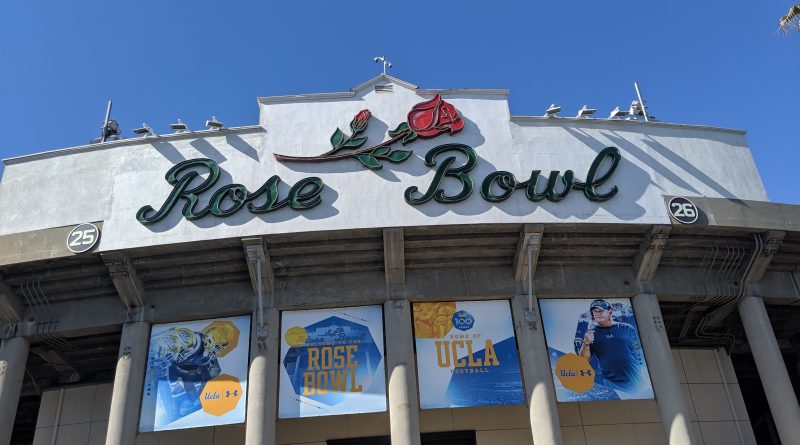 After starting the season 0-2, there were not many expectations for a competitive game, and that would turn out to be for good reason. After an amazing first two games of the year, Jalen Hurts continued his early season dominance on the first series when he ran for 99 yards on four plays to score a touchdown. This started a streak of scoring on every possession of the first half to take a 34-7 lead into the break.

The big question for Oklahoma coming into this season is around their defense. They gave up a couple big plays, but in general was much more stout than in past seasons, as they held UCLA to a total of 14 points. Oklahoma rolls to a 48-14 victory.

This was actually my second trip to the Rose Bowl in three years. I was able to attend the actual Rose Bowl game at the end of the 2017 season for the great Oklahoma/Georgia overtime thriller. The atmosphere for this game was, as expected, much more subdued, but there was still something about being in this historic stadium that makes it special.

After losing their first two games of the season, many UCLA fans stayed away from this game. In fact, Oklahoma fans outnumbered UCLA fans at the game. One reason for this was UCLA students had not even started classes yet so the student section was almost empty.

Another reason for the lower turnout could have been the heat. At kickoff the temperature was around 95 degrees. With the majority of the seating still in the sun when the stadium opened, many of the ushers suggested that fans stay on the concourse in the shaded areas until close to kickoff. They were very prepared for the heat though, which I appreciated. They had several cooling areas with large fans plus several misting areas throughout as well. Even before the stadium opened, many city buses were brought in as cooling stations where people could rest and cool down from the pre-game festivities.

As for the stadium itself, the place was fairly modern while still maintaining its historic feel. They had a large video board on the North side of the stadium and streamer board along the West side below the press box. But, on the South side, they had an old-school scoreboard that felt more at home in this venue. Out on the concourse areas, they had a very large variety of food including tacos, bacon-wrapped hot dogs, and teriyaki bowls, just to name a few.

The UCLA campus was a beautiful campus located West of downtown LA, near Beverly Hills and Bel Air. As mentioned in the stadium overview, the semester had not yet started, so other than a small set of students wrapping up some intersession classes, there was not too many people around. There were a few families enjoying the campus with their small children.

A lot of the building on campus, including the UCLA library, had an older vibe to them, but looked beautiful on the campus grounds. All of the sporting venues, other than football, had their facilities right on campus, including the historic Pauley Pavilion. The student union had a large variety of dining and other services for the students, including a Wolfgang Puck restaurant, and looked up to date inside.

One of the athletic buildings on campus hosted the Hall of Champions, a tribute to all of the National Championships that UCLA has won across all sports. Of course, at the heart of this museum was a view of John Wooden’s office from when he won 10 men’s basketball championships, including 7 in a row from 1967-1973.

Griffith Observatory is one of the most famous landmarks in all of Los Angeles. It is located at the top of a hill inside Griffith Park and provides some of the greatest views of the entire city of Los Angeles. Plus, one of the better views of the Hollywood sign comes from this location as well. Inside, there is great museum that provides exhibits, for free, of all of the planets that is worth seeing as well. The actual planetarium was closed for maintenance during my visit, but that is not needed to enjoy your visit. If physically able, I would recommend parking in one of the parking lots down the hill and walking up to the observatory as the parking there is free and you avoid a lot of the traffic congestion at the top.

Autry Museum of the American West

The Autry Museum of the American West is located inside Griffith Park and a cool place to spend some time while waiting for the Griffith Observatory to open. They had several large exhibits that should early life in the West, including some early weapons, outfits, and other wares from the time. One cool display was one of the first machine guns every used. They also had a large display of Native American art and an exhibit on Westerns in television and cinema. The day I went was actually a free admission day so it was fairly crowded. I think I would have enjoyed it more on another day where there was fewer people and more space to enjoy all of the exhibits.

There are many studio tours that you can take around Los Angeles. Universal Studios is probably the most popular, especially for families, because of the surrounding theme park. But, as a huge Big Bang Theory fan, I knew the Warner Brothers tour was the one I wanted to take.

The tour was very extensive. It started with a view of some costumes and props from a lot of the recent box office hits for the studio, including Aquaman, Wonder Woman, and Harry Potter. They then took us down the streets where they filmed scenes for shows like Friends, Gillmore Girls, and even the original Batman and Robin. They took us into a couple of the studios where they film Mom and Conan as well.

After a couple more stops to show off the prop warehouse and a garage were they displayed all the vehicles from the Batman movie franchises, the tour wrapped up with a self-guided component that had the Central Perk set from Friends and Sheldon and Leonard’s apartment from Big Bang Theory were you could have your picture taken professionally. It also had many other props from television shows and movies throughout the history of Warner Brothers. This tour was easily the highlight of my trip to Los Angeles and highly recommended.

The Getty museum was a great venue that is free to the public, though there is a charge for parking. The amount of art work and exhibits at this museum blew me away. They had multiple buildings with art work pieces from throughout the world throughout multiple centuries. One of the most well-known pieces is the Galle chandelier (above) which resembles a hot air balloon with amazing details throughout. The bowl at the bottom of the chandelier was actually designed to be a fish bowl.

They also had a garden area outside that had a plethora of beautiful flowers. The amount of different flowers in so many different colors was breathtaking. I spent about two hours here and felt rushed and that I missed out on some of the exhibits. This is place I would easily visit again if I came back to Los Angeles.

A trip to downtown Los Angeles led me to a visit to the Grammy museum next to the Staples Center. This was a fairly small museum, with one floor shut down while I was there for renovation. The top floor had some fun memorabilia from multiple musical genres over multiple decades that was very interactive. They also had a fun temporary exhibit with an overview of music’s impact on the sport of baseball. This was really the only highlight of the museum. There were a few pictures on the second floor, but nothing great of note. If you’re in the downtown area, this is a fun place to spend an hour or so, but probably not a place worth going out of your way for.

The Norton Simon museum was a spur of the moment visit on my way to the Rose Bowl stadium as way to kill a couple hours out of the heat before the game. From the outside the building looked fairly small, but they have multiple floors which made it quite a bit larger than I anticipated. The museum actually turned out to be pretty neat, as they have an extremely large collection of artifacts from South and Southeast Asia dating back close to 2,000 years. They also have quite a few paintings on displayed from when the building was known as the Pasadena Museum of Art. There are probably other museums, including the Getty, that are probably more fun to visit if you’re specifically planning a museum visit, but this was a good place for a quick tour while in the Pasadena area.

The Luggage Room was in a very small space located right next to the Del Mar Metro station in Pasadena. It got its name from actually being a former luggage room for the train station. They had a dynamic variety of pizza. I went with the avocado festival pizza which had avocado, tomatoes, basil, and lemon zest. The flavors on the pizza were spot on. The crust was the perfect texture, the lemon zest brought out a lot, and this might have been the best pizza I ever had. Highest recommendation for this place!

Me + Crepe is a small Chinese based restaurant in downtown Pasadena that serves “Jian Bing”, which is a type of Chinese crepe. I decided to try the Peking duck crepe. The duck was very tender and flavorful, but the rest of the flavors were a little lacking. I asked to have it spicy, but it ended up being pretty mild.

Russell’s is a very popular diner style restaurant in downtown Pasadena. I went around 11:30 on a Saturday and there was about a 30 minute wait. I was pretty disappointed when I got my seat at the bar and realized that they were still only serving breakfast since I am not really a fan of breakfast food. With that said, I went with a Belgian waffle and hash browns. The meal was really good and, even more, the service from everyone at the restaurant was top notch. They were very friendly which can be tough when they were slammed like they were. I would definitely recommend this place as a place to visit.

What’s a trip without at least one trip to a extremely unhealthy, fast food restaurant in the area? Southern California had a lot of choices. But since there are In N Out locations in Texas and there used to be Del Taco locations as well, I decided to try an Original Tommy’s burger. Original Tommy’s is known for their chili, which they put on all of their burgers and optionally on their fries. I went with a chili cheeseburger and chili cheese fries. As you would expect as a fast food joint, the chili was not the best. I actually think it took away from the burger. On the other side though, I do think the chili and the cheese made the fries better. In general, I probably would not go to Original Tommy’s again, but it was worth a one time trip.