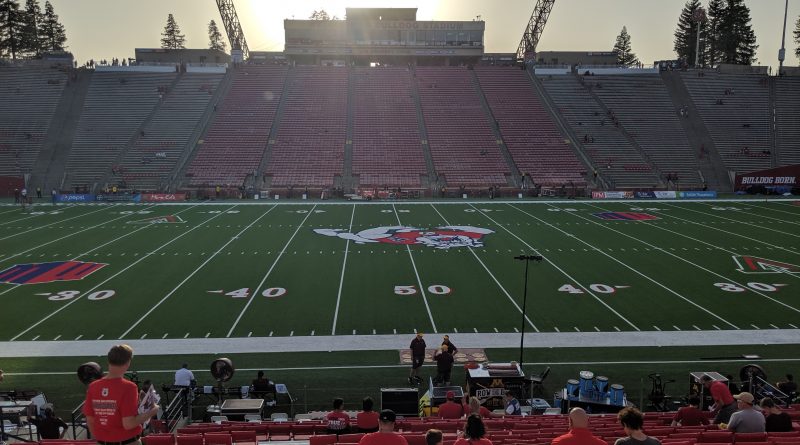 There was quite a bit of hype around Fresno for this game. After a close lose to USC the week prior, Fresno State was excited for their home opener against a Big Ten opponent. Both teams got off to a fairly slow start, with only a single Minnesota touchdown in the first quarter. After a Fresno State field goal in the second, Minnesota scored a second touchdown to move out to a 14-3 lead. Finally, Fresno State’s offense started to pick up with two Jorge Reyna touchdowns, one in the second quarter and one in the third, to help spur a 17-0 run to give Fresno State their first lead of the game at 21-14 at the end of the third quarter.

The fourth quarter was a blast. Minnesota started the quarter with an early score to tie the game at 21. Fresno State came back half way through the quarter with Jorge Reyna running it in himself from two yards out to once again give the Bulldogs the lead. Then, with under a minute remaining and the Golden Gophers facing 4th and 13 from the Fresno State 20 yard line quarterback Tanner Morgan through a perfect pass to Chris Autumn in the corner of the end zone to tie the game at 28 and force overtime. After both teams scored in the first overtime and a Minnesota field goal to start the second overtime, Minnesota intercepted the ball during Fresno State’s second overtime to secure the victory from behind 38-35. An exciting game from start to finish.

With the excitement around the game, I arrived at one of the public parking lots outside the stadium a couple hours before the gates opened and was surprised by how few cars were in the parking lot at the time. As I walked through an almost empty campus I started wondering if there was less excitement for the game than I initially anticipated. Luckily, as I approached the stadium there was a lot going on. There was a lot of events going on around the West side of the stadium where a lot of people were tailgating. This was also the area the Fresno State team walked in to the cheers of the crowd.

The stadium itself was a moderate sized stadium. The first thing I found interesting is they had very steep hills on both side of the stadium that took people up to the top of the seating sections and then had people walk down steps to their seats. Both sides had a lot of golf carts set up to assist those that needed help up the hills which I appreciated. There was single video board on the North end of the stadium, with a regular scoreboard on the South side. There was nothing as far as streamer boards along the two sidelines.

For concessions there were a few standard concession booths scattered throughout, but also a great deal of food trucks and other pop-up booths with various restaurants from across the area. This included Carl’s Jr., Chicken Shack, Dippin’ Dots, and Guadalajara Mexican food. The other thing I really liked that Fresno State had in place was a Happy Hour, where guests could get a hot dog and drink for just $5.00 from the time the gates opened until the opening kick. That was a cool way to encourage people to come to the stadium early.

After attending a soccer game at Western Michigan last fall, I was very surprised how many people were at this Fresno State soccer game. Although the stands were still fairly small, they were packed. It looked like quite a few youth soccer teams in the area made this an event. The first half of the game was dominated by Fresno State. They controlled the ball throughout and scored a goal from Mariona Segales to take a 1-0 lead into half. Bakersfield came back in the second half though and turned the game around. After scoring a goal to tie the game at one, Bakersfield scored on a free kick to take a 2-1 lead which would hold for the final score. It would be Fresno State’s first loss of the season.

It was very hot in Fresno when I first arrived, so I made sure to do my visit early in the morning. The Fresno State campus was pretty and quite large. The first thing I saw was an amphitheater in the middle of the campus which could be use for a lot of events and concerts which I thought was pretty neat. Another pretty cool thing was in the area around the union where there were a ton of booths that various fraternities, sororities, and other campus groups could set up to meet with students. The library was another pretty building right in the middle of campus. Walking past the library after the game on Saturday night, it lit up very brightly in LED lights. The prettiest part of the campus in my opinion was the fountain just outside of the union (below).

One of the best things about visiting Fresno is that is close to many national parks. Yosemite (discussed more below), Kings Canyon, and Sequoia are all just a couple hours away. On my trip to Sequoia I checked out Moro Rock, the Big Trees trail, and the General Sherman tree. Moro rock was a trail that had approximately 400 steps to the top but gave incredible 360 degree views of the entire park. There are plenty of places to stop along the way if you need to rest so the walk is not overly difficult. The General Sherman tree is one of the largest trees in the world in terms of pure volume. It is approximately 2,000 years old. There were definitely a lot of people there, but it was not nearly as crowded as Yosemite. There are a ton of things to do beyond these items as well. It would be easy to spend several days in the park and just start to enjoy the area.

The Fresno Chaffee zoo is a moderate sized zoo located in Roeding Park. They had a lot of nice exhibits and the park was kept up very well. There was a reptile house, a very large sea lion exhibit, and a large African safari area. The only small complaint was the area where the elephants, giraffes, and other roaming animals were kept was so large it was hard to see them from the sidewalks. One elephant came closer, but I was unable to see any giraffes on my trip. While I was there they also had a dinosaur exhibit for an additional cost that a lot of the younger families were excited to see.

The Shinzen Friendship Garden is a small Japanese garden located in Woodward park in the Northern part of Fresno. One special item within the garden was an exhibit of bonsai trees that is only open on the weekends. While in that exhibit, one of the curators was able to explain how much work and detail went into the upkeep of the bonsai trees. As you can tell in the photo below, the root base is very shallow, which means the amount of water and soil is critical to making sure the tree flourishes. I was able to leave with a much stronger understanding on what makes this a type of artwork.

I purposely chose to drive to Yosemite on a Monday morning expecting less traffic then if I attended on the weekend. I was very surprised with how much traffic was still at the park while I was there. The trip to Yosemite started with a long and winding drive up to Glacier Point. The views were amazing from the top. You could see from miles in all directions including a couple waterfalls on the other side of the valley. After taking in the sights from the top, a drive down into the valley led to more spectacular views from the Yosemite tunnel view. Seeing cliffs rise up from both sides was another sight to behold. After this, a short hike took us to the bottom of Yosemite Falls. There was not too much water flowing down this time of year, as the best time of year is early spring when the snow on top of the mountain is melting.

The Starving Artist’s Bistro is a small, unassuming restaurant inside of a strip mall. As the name suggests, they have a nice set up inside where musicians can come and play, although none were there while I was there. I tried the meatloaf with sides of mashed potatoes and a spring salad. The meatloaf itself did not have much flavor, but the BBQ glaze on top was tasty and made the meal better. The salad was also very good with cranberries and a homemade balsamic dressing. They also had an extensive drink list. This would be a fun place to visit with friends during live performances.

The specialty at the Berrock Shop is the bierock, a hearty pastry filled with beef. Eating here, you could tell this was a very popular place with the locals. Most of the tables were filled up and it sounded like the workers knew a lot of the customers by name. I tried a bierock with ground beef, cabbage, and onion filled in a homemade dough and baked. The flavor was very good, but would have been amazing if you could have put mustard on it as well. That’s the only thing I would change if I returned again in the future. It is another one of those hole in the wall places that is worth seeking out.

One main food kept coming up over and over when searching for place to eat in Fresno. One item that has become known as their specialty, and that is tri-tip. To try this item out I went to Westwood’s BBQ and Spice Co. It was a very large restaurant that was very full. It looked like a popular place to meet up with friends over a beer. Knowing I had to try the tri-tip I went with a special of tri-tip and ribs. The tri-tip was cooked for 8 hours and served medium and the ribs had a deep spice rub on the outside. I am not a huge fan of ribs, but the ribs here had pretty good flavor. I greatly approved of the tri-tip though. It was tender and delicious. The sides of potato salad and mac and cheese were both tasty as well. The price was a little on the high side, but not too unreasonable based on the quality of the food.

House of JuJu was an upscale burger joint in downtown Clovis. I went with their specialty burger, the JuJu Bleu burger, a burger with blue cheese crumbles, caramelized onions, bacon, and a blue cheese sauce. The burgers came with a side of potatoes with a dipping sauce. Honestly, I usually like bacon and blue cheese burgers, but I think having both the blue cheese sauce and blue cheese crumbles was too much. There wasn’t enough to counteract that flavor. By the end, all you tasted was blue cheese and it stopped me from enjoying the rest of the burger. They do have other burgers that might be worth trying out, but the JuJu Bleu burger was definitely one of the more disappointing meals on this trip.