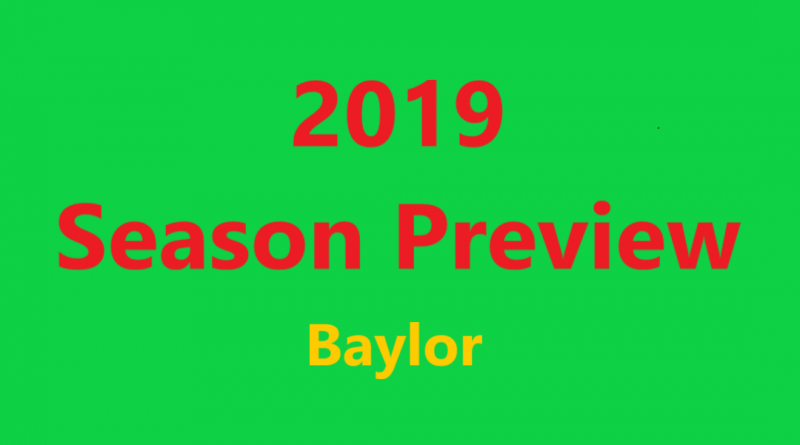 Baylor came into the 2018 season hoping to build off their 1-11 2017 campaign. They were able to make some very big strides forward. The Bears started off the season with a couple easy wins against Abilene Christian and UTSA before losing their non-conference finale at home to ACC opponent Duke. In conference play, Baylor finished in the middle of the pack. They lost all four of their games against ranked conference foes along with TCU, but was able to win four games including games against Oklahoma State and Texas Tech. With their 6-6 regular season record, Baylor was able to make it to a bowl game, beating Vanderbilt in the Texas Bowl, 45-38, to finish the season with a winning record. A great step in the right direction.

The offense was led for most of the season by quarterback Charlie Brewer, who finished the season with over 3,000 yards passing. This included a 400-yard game against Oklahoma. Tennessee transfer Jalen Herd was the leading receiver with 946 yards. Baylor used a running back by committee approach with five different runners, including Brewer, all having over 200 yards on the season. Defensively, the Bears were led by linebacker Clay Johnston, who finished with 99 tackles on the season, 32 more than the second leading tackler.

Charlie Brewer returns as quarterback, which should keep the offense going strong going into 2019. Yes, Jalen Hurts is gone, but Baylor will remain strong at the receiver position with Denzel Mims and Chris Platt both returning. Although they usually perform running back by committee, if one back can get going they might be able to carry the Bears to the next level in the Big 12.

On defense, with the return of leading tackler Clay Johnston, Baylor has a strong chance to improve on that side of the ball as well. The key defensively will be the ability to get more turnovers. After getting only 7 interceptions in 2018, the secondary needs to be able to grab more in 2019. Same with fumble recoveries, after only getting 3 in 2018. If they can get the ball for their offense more often, the defense is strong enough to hold opponents down a decent amount of the time.

The Bears start off with a very easy non-conference schedule against Stephen F. Austin, UTSA, and Rice that should let them get off to a 3-0 start. The key to the 2019 season will be how they play against ranked conference foes after losing to all ranked foes they played in 2018. The good news is Baylor played all three pre-season ranked conference foes, Iowa State, Oklahoma, and Texas, at home. The question is will Baylor pull an upset in any of those games? If they can win one of those three games and win the games they are favored to win the Bears will be taking another step in the right direction. I see Baylor finishing the season at 8-4, 5-4 in Big 12 play, and playing in another bowl game for the 2019 season.