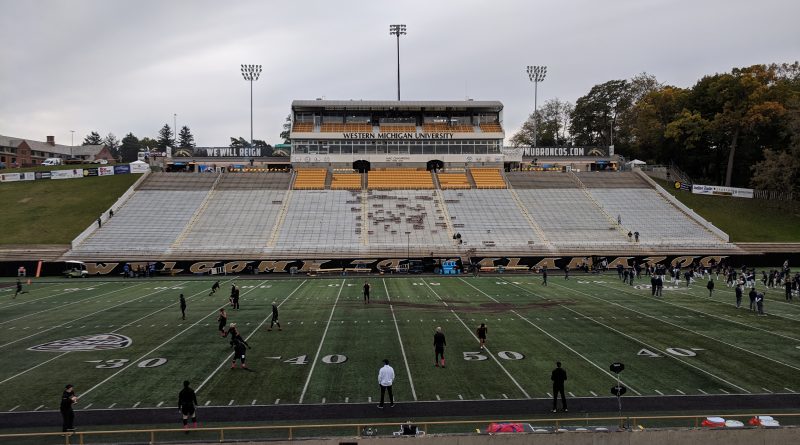 This game took me a little by surprise. Western Michigan was undefeated in MAC play entering this game and Toledo was only 1-2.  The Western Michigan defense ended up being on their heels the entire night. The first half was a back and forth affair.  Both teams scored on their first possessions and you thought this could end up being a shoot out.  Western Michigan scored a touchdown with 24 seconds remaining in the first half to bring them within 3 at 20-17, but then somehow let Toledo go down far enough to hit a 45-yard field goal as time expired to take a 23-17 lead into the break.

Waldo Stadium was a very nice stadium, that had a fairly modern feel to it. It has a seating capacity of 30,200. The stadium was probably less than half full for the game, probably because the game was on a Thursday night as opposed to the usual Saturday kick-off. The stadium had three video screens, two on the north side of the stadium on each side of the athletic stadium building and one on the south side of the stadium. The player tunnel to the field also was open to the concourse.  That means before the game the players would walk out of the indoor football center to the concourse and then cross the concourse to enter the field through the tunnel.

The one thing that Waldo Stadium did not have was a wide variety of concessions. They had the normal concessions stands serving the normal hot dogs, along with a lot of barbecue chicken dishes (sandwiches and nachos). But there were not really any other types of concessions along the concourses. The other interesting thing is the stadium only sold bottled drinks, they did not serve any fountain drinks. This might be the first stadium I’ve been to that did that.

The Western Michigan campus is a typical college campus with nothing extraordinary in place.  In fact, while visiting the campus bookstore in the student union I asked the students working there if there was anything on campus I should try to visit while I was there.  They both responded, “No. There really isn’t anything special about our campus.”  They did mention there were a couple of nice fountains on campus, but they had already been turned off for the winter.

The student union did seem a little run down, especially compared to the Central Michigan campus I visited the week prior.  Downstairs they had a few dining selections like a Subway, Biggby coffee, and a K-Zoo Coney Island. I tried a coney from K-Zoo and did not find it very good.  It looked like they also had a dining facility upstairs as well that I probably should have looked into more.

The Air Zoo museum was a very nice and interesting place to visit.  They had planes on exhibit dating all the way back to World War I through a massive NASA plane that was more recent.  They also had some hands-on science exhibits and a traveling weather exhibit on site.  I enjoyed being able to read into the history of many of the planes that they had on display.  They also had some rides for kids and various flight simulators which would make this a fun place to visit with a family. On top of the main facility they also had a secondary location where you could go and watch people work on restoring some other planes that they had on site. The secondary location was not very exciting, but I would highly recommend the main Air Zoo museum on a trip to Kalamazoo.

The American Museum of Magic is known for having the largest collection of magic memorabilia in the United States and second largest in the world.  It is located in the downtown area of Marshall, Michigan, about 30 minutes east of Kalamazoo. The museum was in a small two-story building and had many different displays, pictures, and a few hands on exhibits. While I was looking around, a large tour group came in and took over most of the downstairs area with a magic show, so I was not able to explore the entire museum while I was there. What I found was interesting, but it wasn’t quite as large as I had anticipated.  Overall, I would recommend a short visit if in the area, but it is probably not worth the trip just by itself.

The Fantasy Forest is a small part of the Leila Gardens in Battle Creek, Michigan.  It is a group of around 15-20 former ash trees that were carved into various fantasy creatures.  There were sculptures of Grout, gnomes, a castle, wizards, and dragons. I really enjoyed seeing all the various sculptures and the amount of detail that went into all of them. You could tell the artists were very invested into their work.  The Fantasy Forest was the highlight of the Leila Gardens.  There were a few additional walking trails, but nothing else of note.  There is also a small museum on premises, but it is only open on the weekends, so closed while I was there.

Meijer Gardens is a very large park that is located in Grand Rapids, Michigan, about 45 minutes north of Kalamazoo. The facilities are located on about 158-acres and contains a large sculpture garden, a large outdoor Japanese garden, and three, unique indoor conservatory. The day I went the weather was beautiful with a temperature of about 75 degrees.  Some of the trees in the gardens were starting to change colors which led to a nice contrast of oranges, reds, and yellows among the entire park. There is also a large children’s garden which would make this a great place to take families.

I had a fairly long list of dining establishments to try while I was in Kalamazoo and the Feed the World cafe was not on that original list. I was feeling a bit under the weather and decided to try something close to my hotel and this seemed like the most interesting place nearby that wasn’t a regular chain restaurant.  Feed the World cafe has a philosophy of only using local ingredients, plus for every meal purchased they pledge to provide a meal for those in need as well.

There was a very wide variety of menu options serving everything from burgers and BLTs to fresh fish and jambalaya.  I decided to go with the chicken souvlaki. This was grilled chicken skewers with onions and peppers served on top a large plate of Mediterranean noodles with fresh lemon.  I am usually not a fan of peppers, but this was actually very good.  Having a fresh lemon to squeeze onto the noodles added a great flavor on top of the dish. At the end, this was a nice surprise location to get to visit.

University Roadhouse is a very popular joint located right next to the Western Michigan campus. This is the place that most people in Kalamazoo suggested I visit while I was in town. It was your basic sports bar, with many televisions throughout, but because it was located up on a hill it also provided great views, especially from up on the second floor.  I decided to try the Kalamazoo Best Burger (I was in Kalamazoo after all!) which came with white cheddar, a homemade bacon jam and garlic aioli. The flavors all worked very well together with the sharpness of the white cheddar contrasting well with the sweetness of the bacon jam.  The fries were also fresh and crisp.  They were very busy even though I went during lunch, so I can only imagine it would be a great place to go with friends at night.

Cornwell’s Turkeyville is located a few miles outside of Marshall, Michigan, and is more than just a restaurant.  It started as a turkey farm many years ago and still has many turkeys that roam around outside.  The restaurant was later added to the farm and it only serves meals containing turkey. They serve everything from traditional turkey dinners and open turkey sandwiches to even having their cheeseburgers only served with turkey patties.  They also have a theatre that produces various dinner shows throughout the year and an ice cream parlor on premises.  I went with the traditional dinner which included turkey, dressing, mashed potatoes, coleslaw, and cranberries.  It wasn’t the best turkey dinner I’ve had, but the atmosphere made it worth the trip.

Sweetwater’s Donut Mill was a very popular joint with a long line and mostly filled tables inside.  It had its fair share of regulars, that the employees knew as soon as they walked in and got them a hot cup of coffee on the spot.  This place had a huge variety of donuts, which made it hard to choose which ones to try.  After talking to the server, along with some suggestions from the person behind me in line, I decided to try a Boston cream and a strawberry cheesecake.  Boston creams are my favorite and the one I had here did not disappoint.  The strawberry cheesecake donut was a strawberry filled donut with a cheesecake icing and was also very good.