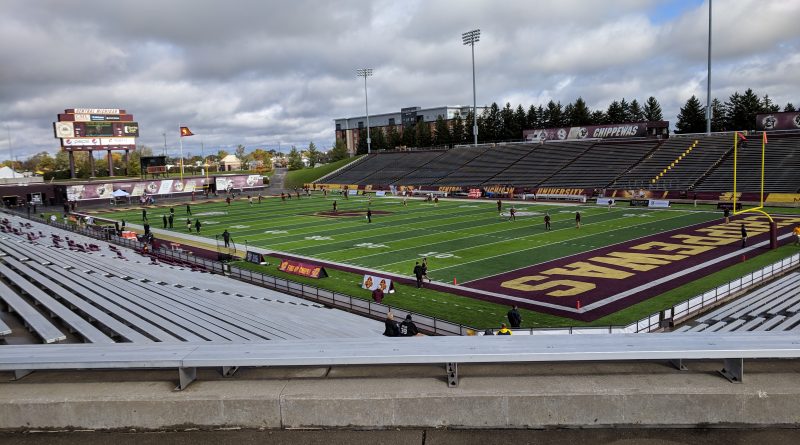 This was one of the more miserable games I have ever been to, weather-wise. I pulled into the parking lot just as a large rain shower started passing through. I was able to stay in my car until the rain stopped and some blue sky started showing again.  I thought I was set.

But then once in the stadium, with about ten minutes left in the pre-game, another large shower came by.  This one actually had some heavy sleet mixed in with the rain. You had to look away from the field to keep the ice from hitting you in the face.  On top of that, five minutes into the game they announced a lightning strike hit within eight miles of the stadium and we had to evacuate into the concourse area. Thankfully, once the game resumed the heavy rain and sleet had moved by. There was still seem light rain and sleet that came through once or twice during the game, but nothing as bad as the first round.

As for the game itself, Western Michigan pretty much owned this game from start to finish.  They jumped out to a 21-0 halftime lead. Central Michigan did try to make a game of it in the third quarter. They scored ten points, to pull within 21-10, and got the ball back to try to pull even closer. But on that drive, quarterback Tommy Lazzaro threw an interception, and Western Michigan then drove down for another score. Western Michigan scored once more in the fourth to come to the final score.

With a combination of the poor weather, along with Central Michigan’s 1-6 record going into the game, the attendance for this game was very poor. The student section was basically non-existent, especially after the lightning delay. The stadium itself was a little run down, but not too bad. The seating area and the concourse areas were both pretty nice. One thing that did seem fairly dated was the scoreboard. They had one small video board on the north end of the stadium that appeared to have seen better days. It had some issues with clarity and contrast, plus it was hard to hear the sounds that came from the videos that were played.

One small annoyance was the third down defense music. For every third down on the defense, they would play Welcome to the Jungle by Guns N’ Roses. After a few times, this became extremely repetitive since Western Michigan had a total of 14 third downs during the game.

The stadium served basic ballgame fare.  Along with the normal concession stands, they did have a fresh kettle corn stand where they popped various flavors fresh. They also had a small Domino’s pizza stand. The prices were all very reasonable and the cheapest of the three stadiums I have visited this year to this point.

I was pleasantly surprised to learn that field hockey was a college sport. I don’t think I realized that before looking to see what game I would attend as my other sporting event. I did watch a couple field hockey games during the last Olympics, but knew very little about the game before attending. There was a heavy rain that came just before arriving at the event, but luckily it stopped in time and I was able to enjoy something new.

Field hockey is divided into two 35-minute halves. It seemed that Ball State controlled the game most of the way, but just were never able to capitalize. About fifteen minutes in, Central Michigan had their first penalty shot opportunity and took advantage, scoring what would be the only goal of the game.

There were only about 50-75 people in attendance, but a lot of those were parents of Seniors who were there to attend the last game of the season. It was nice that they were able to see them pull out out the win for just their second win of the season and first MAC conference win.

The Central Michigan campus is a compact, but pretty campus just south of the downtown Mount Pleasant area. All the people I talked to were very friendly and most of the facilities seemed very updated.  The two things I saw on campus maps I wanted to check out were the natural history museum and the botanical garden. I did end up fairly disappointed in both. The museum was just one room filled with very basic items and the botanical garden was just a gazebo with a few trees and flowers around it. Outside of those areas, there were several large fountains throughout the campus, and I did like the arch that was over the Southern entrance to campus.

I was also able to get a peek inside McGurik arena, where the basketball teams play. Since they had a live practice going on at the time I was not allowed to take photos, but it was a very nice arena and the entire athletic facility looked very modern with a major renovation that occurred during the 2009-2010 season.

The Central Michigan union had a fairly modern feel to it, especially in the Down Under food court.  They had areas with pizza, burritos, pasta, burgers, and even sushi.  All of the food was made with fresh ingredients and made to order. I went with a half Wally pizza which had a basil pesto sauce, along with fresh mozzarella, basil, and tomatoes. It was very tasty and high quality for a campus dining facility.

The central part of Michigan has a strong Native American heritage and the Ziibiwing Center is part of that heritage. This center highlights the long history of the Chippewa people, starting from their movement to the region up to the current culture that is still prevalent today. The museum contains a few videos along with many artifacts to examine. Central Michigan University has strong ties in still using the Chippewa name today, so it was beneficial to see where these ties came from and what made them so strong.

The Dow Gardens is a 110-acre facility that has a wide variety of trees and gardens located in Midland, MI, about 30 minutes East of Mount Pleasant. Coming here in mid-October turned out to be a good choice, as some of the trees were starting to turn, leading to nice variety of oranges, reds, and yellows intermixing throughout.  The streams and waterfalls also added a nice ambience to the area. Unlike the Whiting Forest area (discussed below), there were not too many people here which made it very serine and peaceful. There were a few places where you could just sit and take in everything around you.  And at only $5.00 for both facilities, the cost is extremely reasonable.

The Whiting Forest is part of the Dow Gardens, but located adjacent in a different facility.  Buying a ticket to one facility will allow you access into both.  The Whiting Forest is a brand new attraction that just opened in October 2018 and known for having the largest tree canopy walk, at over 1,400 feet, inside the United States.

This place was very popular since it just opened, especially with families with young kids. Some areas of the canopy had a large canopy net that kids could climb on. The facility also has a large playground and some walking trails through some nice forest area. There were also quite a few workers around the canopy to help families along the way.

Dog Central is a popular joint in downtown Mount Pleasant just a short distance from the Central Michigan campus. It is known for being a popular spot for college students late into the night on weekends with a 3 AM closing time.  I tried two different dogs on my visit. The first was the classic Detroit Dog, which has chili, mustard, and onions. The second one I tried was the elote dog. This one had corn, cotija cheese, mayo, cayenne pepper, and a lime wedge.  I wasn’t sure if I was going to like having mayo on a hot dog, but all of the flavors actually worked very well together. Both of the dogs had a good crunch to them and were both very tasty. I would recommend this place as a to-go lunch joint if you’re in town.

There seems to be a lot of pubs and breweries all throughout Michigan.  In Mount Pleasant, one place that is known for their brews is Mountain Town Station. This location is in a renovated former train depot. I went with the stout glazed salmon with sweet potato mash. The stout glaze blended very well with the fish and gave it a slight kick. The menu is fairly large which should make it easy for everyone to find something they would enjoy.