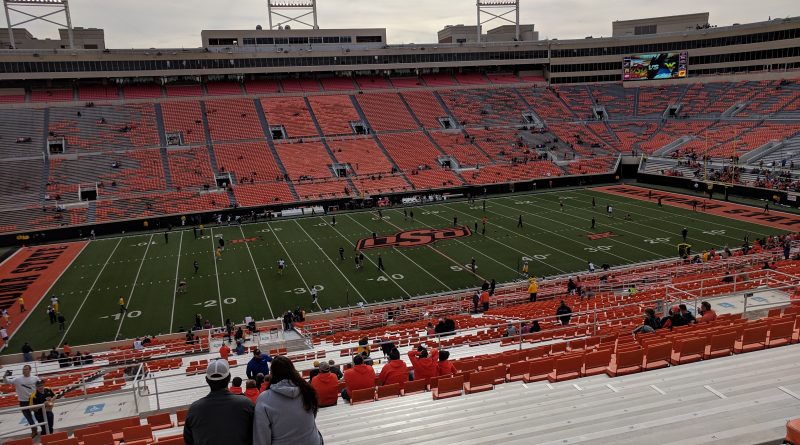 Like most Big 12 games of the 2018 season, this game was a high scoring shoot out. It was one of the most exciting games I’ve ever been to live. The fact that I was fan neutral, I believe, let me soak in the game and the atmosphere even more.  Already up 21-14 late in the first half, West Virginia was able to score ten points in the final 1:17 of the half to take a 31-14 lead into the break. About a quarter of the crowd appeared to leave at half time and they missed out on a great final half of play.  Oklahoma State held West Virginia scoreless in the third quarter and pulled back to 31-24.  Both teams scored at will in the fourth quarter, but with 42 seconds remaining in the game, Taylor Cornelius threw an 11-yard pass to Tylan Wallace to take their first lead of the game at 45-41. Even with that little time, West Virginia took the ball down to the OSU 14-yard line with one second remaining.  On the last play of the game the pass to the end zone was incomplete and Oklahoma State completed a great comeback to pull the upset.  The students rushed the field in celebration.

The Boone Pickens stadium renovation was completed back in 2009 and it has become a very nice stadium.  The last time I attended a game here, in 1998, the west end of the stadium was not closed in yet so it was nice to see how much larger the stadium is. Now the stadium has a capacity of 56,790.  The stadium was approximately 80% full at kickoff.  A cold front came through during the came so temperatures dropped from 65 degrees at kickoff down to 50 degrees by the start of the fourth quarter.

The one thing I felt Oklahoma State did very well was their multimedia presentation throughout the entire game.  Music and videos seemed to flow seamlessly throughout the entire game. There is a giant video board on the east end of the stadium on the outside of Gallagher-Iba arena.  There are two additional small video boards on the east side of the stadium and two additional ones on the northwest and southwest corners.

There was a large variety of concessions sold at the game.  There were stands for Down Home BBQ, Slim Chickens, Freddy’s Steakburgers, Chick-Fil-A, Aspen Coffee, and Pizza Hut. They also sold beer throughout the stadium. This was the first college stadium I attended that sold beer to the public and not just in the donor lounge. (Aloha Stadium did sell beer, but it is not an on-campus stadium.)

Gallagher-Iba is one of the more historic college arenas in the country and a place I have always wanted to see a basketball game. It has been in place since 1938 and currently has a capacity of just over 13,000.  Because of the steepness of the seats it is considered one of the loudest arenas in the country as well when full.  There was a very small crowd for this women’s game against non-conference Prairie View A&M.  It didn’t look like the teams showed up early on either.  Outside of two free throws, the first actual basket of the game didn’t come until over half-way through the first quarter. Prairie View kept it close through the first half, but Oklahoma State finally put them away in the third quarter.  Final score: Oklahoma State 70 – Prairie View A&M 50.

Although I have been to Stillwater a few times before, this was my first time to spend time on the actual Oklahoma State campus. I have always heard that it was very pretty and I would have to agree. My first stop was the visitor’s center which had a couple horse statues outside to welcome potential students.  Right next to the visitor’s center is Old Central which is the oldest building on campus and the first permanent building built in 1894. Today, the building houses the Honors College.

The next stops on campus were the library that student union.  They were just starting to put up some of the Christmas decorations outside both locations. In front of the library was a fountain that was shut off for the winter, but is famous for being colored orange during homecoming week. Inside the union was also very nice. They had a wide variety of places to eat including Baja Fresh, Chick-Fil-A, and a Johnny Rockets, including full 50’s decor.

The other nice place on campus is Theta Pond.  It is a fairly small pond, but with its fountains and mature trees was a very relaxing place to sit for a few minutes. There were also a few students out feeding some ducks that were on the pond as well. It made for a very nice way to end the visit on campus.

Heritage Hall is located on the ground floor of Gallagher-Iba arena and is the home to the all the individual and team athletic championships that have been won by Oklahoma State. This area is open to the public and is very well put together and maintained. The central part of this area was a display of all the national championships, including 34 wrestling championships, the most by any school for any sport. They also had some displays focusing on some of the most famous athletes to come out of the school.

Pops is a popular place just outside Edmond in Arcadia, Oklahoma.  It is known for having a very large collection of various sodas along with a large soda bottle outside that lights up at night.  Pulling up I was surprised that it was actually a convenience store and gas station. I was expecting something closer to a warehouse selection. Instead, it was just like walking into a gas station, although all the coolers did have a very wide selection of sodas.  On one side they also had a diner which was very busy when I was there. I went with a small variety of soda including a cola, a black cherry, a cherry cream, and a ‘Green Pop’, which tasted like green apple.  It was a pretty neat place to drop by, but not as must see as I originally anticipated.

Guthrie, Oklahoma, is a town about 40 minutes West of Stillwater and was the first state capitol of Oklahoma. The Oklahoma Territorial Museum highlights the history of the land that would eventually become Oklahoma. On the first floor of the museum they highlighted the history of Native Americans in the area through the first people that came to the area with the land run.  The second floor went through the history of becoming the 46th state, along with how the capitol ended up moving from Guthrie to Oklahoma City.

A couple of the highlights were flags located on the second floor.  The first was a large American flag that was one of the first flags created that showed the 46th star for Oklahoma’s inception as a state.  The second was one of the first state flags (shown below). As red would become closely tied to communism it was decided to select a new flag in the mid-1920s that would eventually become the state flag that Oklahoma has today.

I was very impressed with this museum and the amount of artifacts and history lessons they had throughout. It was also much larger than I anticipated which made it worth the visit. Attached to the museum is the Carnegie library, which was built in 1902. It is now a historic landmark and worth a look while visiting the museum.

The Oklahoma Frontier Drug Store Museum is one of those little places you probably wouldn’t go out of your way to visit, but already being in Guthrie I decided to stop into this small vintage drug store just a few blocks from the Oklahoma Territorial Museum. This location was once an operating drug store but opened as a museum in 1992. Inside the shelves were filled with all type of remedies from the past. There were sections that had old toiletries such as toothpaste, shampoo, and soap to basic remedies for all types of ailments. They also had an old fashioned soda fountain that were typical for older drug stores of the past. It did not take very long to go through, but definitely a neat place to visit while in town.

Boomer Lake was suggested as a place to visit while in Stillwater. Luckily, Friday was a beautiful day with temperatures in the 60s, so I was able to take advantage. There were walking paths around the entire lake with quite a few geese around several areas. There were also several people in the park taking part in the Frisbee golf course and playgrounds and picnic areas scatter throughout that would make this place very family friendly.

The Stillwater history museum was fairly small but also very interesting. It did a good job at showing the history of the city from when it was first established before statehood going through most of the 20th century. They showed the history of some of their most popular downtown department stores to some early memorabilia both from Oklahoma State and Stillwater high school. They also showed some items from the first Stillwater radio station and history on its start. It was a very interesting visit and worth a stop while you’re in town.

Eskimo Joe’s is one of the most famous place for college eats in the country and is located just a couple blocks from Gallagher-Iba arena and Boone Pickens stadium. They have a large restaurant, with two-stories, along with a very large gift shot where they sell their popular t-shirts that you might have seen people wear from time to time.  I went with the Cowboy Classic, which was a burger topped with BBQ sauce, cheddar cheese, and grilled onions, along with a side of fries.  The burger was tasty and the fries had good flavor.  The one thing I wanted to try was their famous cheese fries, but I was told I could not add cheese to the fries, even for an up-charge. Aside from that, Eskimo Joe’s has a great atmosphere which makes it easy to see why it is such a popular joint.

The Hideaway is another popular joint that is right across the street from the OSU campus.  Although there are other locations across Oklahoma and Arkansas, this location is the originally location and is run separately from all the others.  I went right after they opened at 11 AM and it quickly filled up.  I went with a mini pizza with Italian sausage and onions. This was one of the best pizzas I have eaten in a long time.  The crust had a nice crunchy texture and the sauce had a perfect blend of spices that gave it a unique but delicious flavor.

Cherokee Strip BBQ was a recommendation of a place to try while I was in Stillwater. As a big BBQ fan I was happy to see what Stillwater had to offer in this department. The location was in a small strip mall with a fairly low key decor. Inside, I went with a sliced brisket sandwich with a side of mac and cheese. The brisket was very good. It was very tender and had a great char on the outside.  The mac and cheese left something to be desired. It just did not seem to have very much flavor to it. I would still recommend this place, but pick from among the other number of sides for your meal.