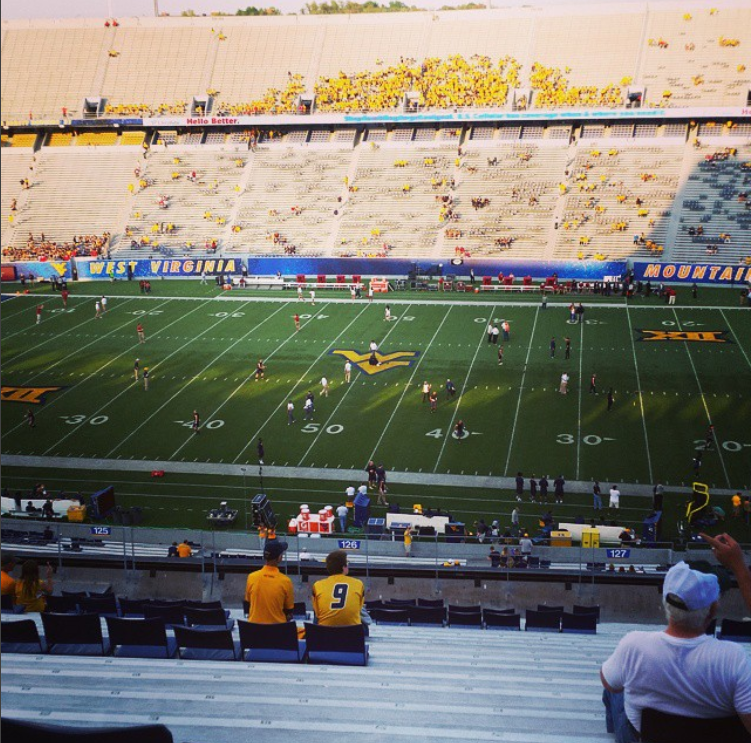 This game in Morgantown was a fairly spur of the moment trip. I have some family that lives in Kentucky that my mom wanted to visit. As part of that trip, I was able to tack on this trip to Morgantown. I have another relative that lives just East of Morgantown, near Bruceton Mills, that we were able to visit as well.

The first thing I remember about going to the game was when I first arrived. I was walking towards the stadium when I walked past a few students, two guys and one girl, that obviously started drinking pretty early that day. As I was walking by I hear the girl say, “Hold my drink, I am going to go into that bush and pee.” Sure enough, that’s exactly what she did. Got to love college students sometimes.

As for the stadium itself, the stadium is actually located about a mile and a half north of the main campus. Although the law school is nearby, there really was not a whole lot of campus I was able to see. I do believe they had a tram service that went back and forth between the north and south campus, but I did not go down to the main campus as part of this trip.

I was able to have a great seat for this game, sitting near mid-field. I was surprised that the game was not a sell-out, being OU was undefeated and ranked #4 going into this game. There turned out to be quite a few empty seats throughout the stadium, including near where I was sitting. Luckily, the people that were sitting near me were all very respectful of me wearing my OU gear and we were all able to enjoy a very exciting game.

This game went back and forth nearly all night. It seemed that every time OU scored West Virginia would come right back. I remember right before the half West Virginia kicking a 52-yard field goal to tie the game at 24. This was after having a 5-yard penalty that moved the kick back from 47 yards. All of us in the stands were thoroughly impressed with the kick and, honestly, I think the other fans were impressed with me giving their kicker such props.

Finally, OU was able to pull ahead in the third and went on to a 45-33 victory. Even after the game, a couple students who were in head to toe WVU gear came up to me as I was walking back to my car and congratulated us on the win and asked how I enjoyed my time in Morgantown. It is always nice to have that type of mutual respect after everything is said and done.

Unfortunately, that game ended up being the peak of the OU season, who went on to lose 3 of their next 5 on the way to an 8-5 season record. Luckily, the trip was a highlight that I was able to participate in.