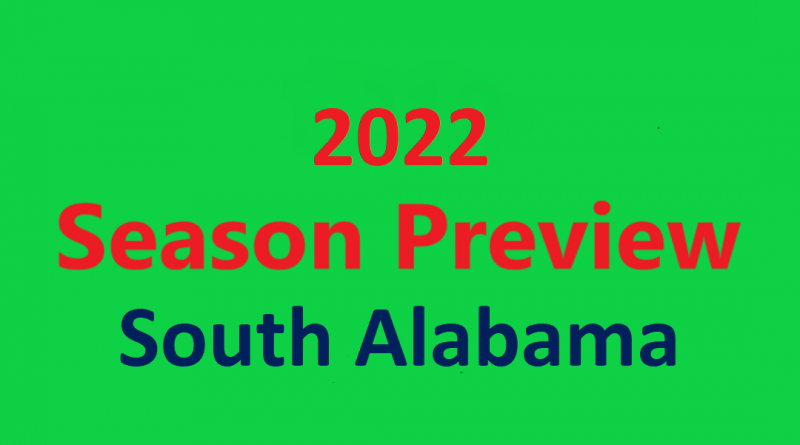 The 2021 season started off strong for the Jaguars. They had a strong victory over Southern Miss and a close win at Bowling Green out of the MAC. They also had a victory over Alcorn State to start off at 3-0.

The start of conference play brought a couple of very close losses to both Louisiana and Texas State in overtime. This would lead to a struggle throughout the rest of season. They were just a couple scores away from being a much better team record wise.

South Alabama’s first four conference losses were all by ten points or less. Towards the end of the season, they had a couple of blow out losses at Appalachian State and Tennessee out of the SEC. They also lost their season finale in overtime against Coastal Carolina to finish the season at 5-7, 2-6 in Sun Belt play.

If South Alabama wants to compete better this season that will need to start on the offensive side of the ball. They average 25 points a game through the season, but less than 17 points a game through the final four match ups. This starts with Desmond Trotter returning at quarterback. He played in only 5 games in 2021, but had a stronger 2020 season. It won’t help that star wide receiver Jalen Tolbert has moved on to the NFL. In his place, Jalen Wayne and Caulin Lacy will both need to step up.

Speaking of stepping up, Terrion Avery will need to step up the running attack if the Jaguars want to have any change. Being a leading rusher with 508 yards and only 1 rushing touchdown is not a recipe for a winning season. If some holes open up with the offensive line and things can get rolling better there this season, they have a chance.

The defensive side of the ball is where South Alabama excelled most in 2021, giving up under 24 points for game if you take out the game at Tennessee. They have great balance with six different players having at least 45 tackles on the season. On top of that add in 31 sacks and 15 tackles with eight returning starters and you have a chance to make a major impact on defense.

The Jaguars should start their season off with a win against Nicholls, but then their schedule will be pretty difficult through early November. Central Michigan is a tough team from the MAC and then an almost sure loss at UCLA is in the cards as well. Louisiana Tech at a home is definitely winnable, but then they have to play at Louisiana to start off conference play which is never easy.

Conference play is always hard to pick in the group of five conferences as teams can move up and down a lot quicker than in some of the Power Fives. After the Louisiana game there are definitely some winnable match-ups against Louisiana Monroe, Troy, and Arkansas State to try to move up the conference standings.

I just think the second half of the conference schedule is going to be tough. Texas State has been improving and then you have Southern Miss and Old Dominion coming in from Conference USA to close out the season. I find those match-ups fascinating to see the difference between those conferences come to fruition. I think South Alabama can finish the season with a 5-7 record.