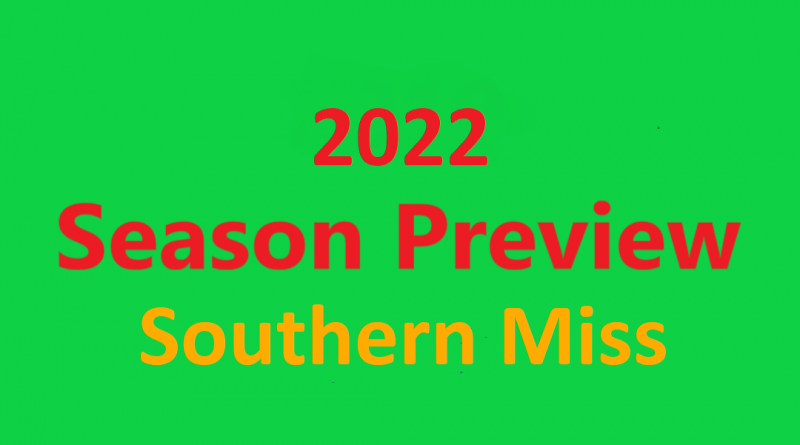 Southern Miss struggled through most of the year. The season got off to a rocky start with a 1-3 start in non-conference play. The highlight of that run would be the shut out win over Grambling. Having to play Alabama to end that run is never a good way to end the non-conference schedule either, as they gave up 63 points in that loss.

Conference play did not get much better for the Golden Eagles. They started off with a very competitive game at Rice that they lost 24-19. The next five games did not get better as they lost all of them by at least 10 points to start off conference play at 0-6.

The season did end off on a slightly higher note, however. Southern Miss did win their final two games at Louisiana Tech and at Florida International. This let the Golden Eagles finish the season with a 3-9 record, 2-6 in Conference USA play.

I mean, it can only improve offensively, right? Southern Miss scored under 18 points per game, finishing ranked 122nd out of 130 teams. Let us start with the quarterback situation. Six different players through at least 10 passes for the Golden Eagles in 2021. That is the definition of inconsistency. It didn’t help that Southern Miss had the most turnovers in the country and gave up more tackles for loss than any other team either.

Where does that consistency come from this year? The starter will likely be Ty Keyes. He led the team in passing during two games in 2021. If the offensive line can protect him better so he can have time to perform, this can only help improve things offensively. Behind Keyes, Frank Gore Jr. returns at running back after being a lone bright spot last season. He had over 800 yards rushing and likely would have had more if he hadn’t also had to play quarterback over the last part of the season.

The defense is likely slightly underrated. With an offense that struggled as mightily as they did, the defense had to carry a heavy load comparatively. The Golden Eagles actually led Conference USA in pass defense. Leading tackler Malik Shorts returns at safety and leads a talented secondary group. The area that needs the most improvement in 2022 is upfront. If they can get more pressure on the quarterback to help the secondary, the defense can move a step forward this season.

Southern Miss starts off with a quite difficult non-conference schedule in 2022. The only likely win is a home game against Northwestern State with other games against Liberty at home and Miami and Tulane on the road. This will likely lead to a 1-3 start for the Golden Eagles.

Conference play doesn’t look too much better either as Southern Miss moves from Conference USA to the Sun Belt this year. That move starts off with a couple of winning games at Troy and home against Arkansas State, but then the middle part of the conference schedule is very tough. This includes games against Louisiana and Coastal Carolina which are usually the elite teams in the conference.

If it’s any consolation, the last game against UL Monroe is probably the most likely conference win of the year. Southern Miss will struggle for most of the season and finish with a record around a 4-8, a slight improvement over the 3-9 record in 2021.