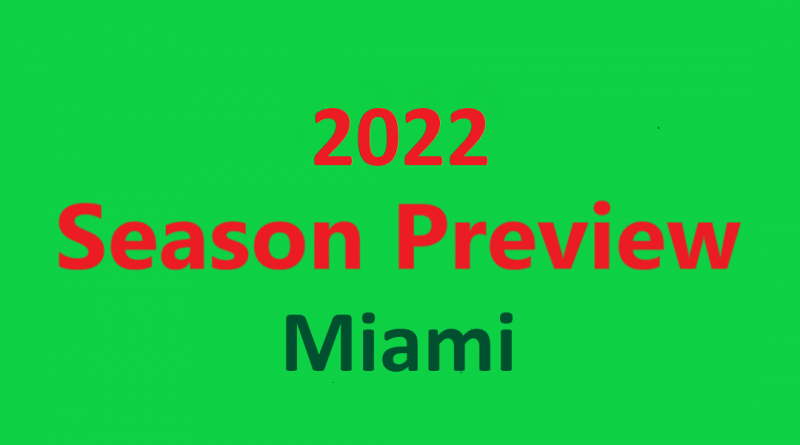 The 2021 season was tale of two halves for the Hurricanes. The season started off playing Alabama, which is always a tall task. They followed that up with a much closer than expected win against Appalachian State before losing a second non-conference game against Michigan state. They also lost star quarterback D’Eriq King in that loss as well to a shoulder injury.

Conference play did not start off much better for Miami. They started off with two close losses to Virginia and North Carolina to start off at 0-2 in the ACC.

Things turned around greatly in the second of the season. This started off with a back-and-forth game against NC State that Miami won 31-30. The next week, Miami won its second straight game against a ranked opponent, beating Pitt 38-34.

By winning 5 of their last 6 games, Miami finished the season with a 7-5 record. They were scheduled to play in the Sun Bowl against Washington State but had to withdraw due to Covid-19 issues.

Miami is a team that could easily compete for a conference championship if all the pieces come together. This starts with new head coach Mario Cristobal, a former Miami player that is happy to be home. Tyler Van Dyke will lead the way after being thrown into action unexpectantly in 2021. That experience should help him make even more strides after throwing 25 touchdowns last season.

The running game is where the most improvement needs to occur for the Hurricanes. Leading rusher Jaylan Knighton returns and transfer Henry Parrish comes in from Ole Miss to help shore things up. Wide receiver is also a question mark with star Charleston Rambo moving on to the NFL. Someone will need to step in and take over the lead receiver position for Miami to flourish offensively this season.

Defensively, there a lot of pieces to fill coming into this season.  Most of these pieces will be coming in from the transfer portal. The two leading tacklers, Corey Flagg Jr. and Waynmon Steed both return at linebacker to provide some leadership. The defensive line is the area that will rebuild the most with transfers. The season may ride on how quickly these new guys can mesh together up front.

Miami starts off with a couple easy non-conference games against Bethune-Cookman and Southern Miss that should get them off to a 2-0 start. Then the season really begins in Week 3 when they travel to College Station to play a strong Texas A&M team. They finish the non-conference season against Middle Tennessee which should leave the Hurricanes at 3-1 entering a bye week and then ACC play.

The ACC is another conference that looks wide open this year. As I look across the conference schedule, I see a lot of toss up games. I think a lot of this season for Miami will depend on how quickly the team can pick up on the schemes that Coach Cristobal brings in during his first year. In most cases, this leads to a couple more losses during the year than a more veteran coach.

The two games I expect victories in are a home game against Duke and a road game at Georgia Tech. Clemson should be back at the top of the conference this year and will likely give the Hurricanes a loss. This leave five games that I would rate as a toss-up. If Miami goes three and two in those games, that will leave them with an 8-4 record for the season. Not great, but Miami should be trending up over the next couple of years.