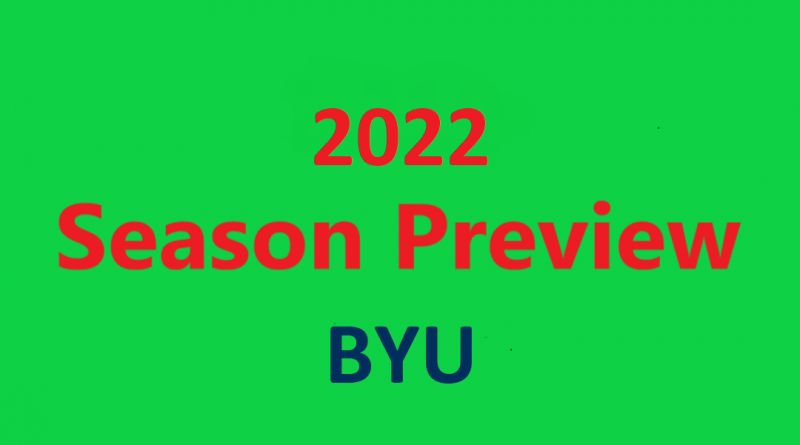 BYU started the 2021 season out strong. They came out of the gate playing three PAC 12 schools, two of them against ranked teams, and winning all of them. They followed this up with wins over South Florida and Utah State to start off the season 5-0.

The middle of the season was the hiccup for the Cougars. This started with a loss at home to Boise State followed by a loss at eventual Big 12 Champion Baylor. BYU did not stay down for long though with another five-game winning streak to close out the regular season, including two more wins against PAC 12 schools Washington State and USC. BYU finished 5-0 against the PAC 12.

Unfortunately, the season ended on a negative note losing to UAB in the Independence Bowl. The Cougars ended the season at 10-3.

The BYU offense returns a lot of weapons from its 2021 season. This starts with quarterback Jaren Hall. After throwing for over 2500 years with 20 touchdowns and only 5 picks, the hope is he will continue right where he left off. Puka Nacua and Gunner Romney, who were the two leading receivers, also return leading to a strong passing game being in play for 2022.

The biggest question mark will be at running back. Tyler Allgeier has moved on leading a huge gap in the backfield. Most likely stepping in will be Cal transfer Christopher Brooks. Luckily, guarding the new running back will be one of the better offensive lines in the country. If the running game can step up, the BYU offense will be very formidable.

The defense will be the key to the Cougar’s 2022 season. They gave up nearly 25 points a game in 2021, and they have some strong offensive teams they are playing in 2022. A few key pieces return, including leading tackler Ben Bywater, who had 102. The second and third leading tacklers all return as well. The key will be the defensive line. After only recording 20 sacks in 2021, getting pressure on the opposing quarterback could be the main key for success for BYU in 2022.

In their last year as an independent, BYU has a very front-loaded schedule. After starting the year in Tampa against South Florida, Baylor comes to town followed by a trip to Oregon. After those two tough matchups, the Cougars play a couple home games against Mountain West opponents in Wyoming and Utah State.

The game of the year for BYU is probably on October 8th when they play Notre Dame in Las Vegas. Both schools have a lot of supports throughout the country, so that game should have a fun atmosphere. After that game, Arkansas comes to Provo for another tough matchup.

If the Cougars can get the through the first half of the schedule, the back half gets much easier with only their last game at Stanford being against a Power 5 school. They do have a couple interesting away games against Liberty and Boise State in that stretch, however. BYU should finish the season around 8-4.