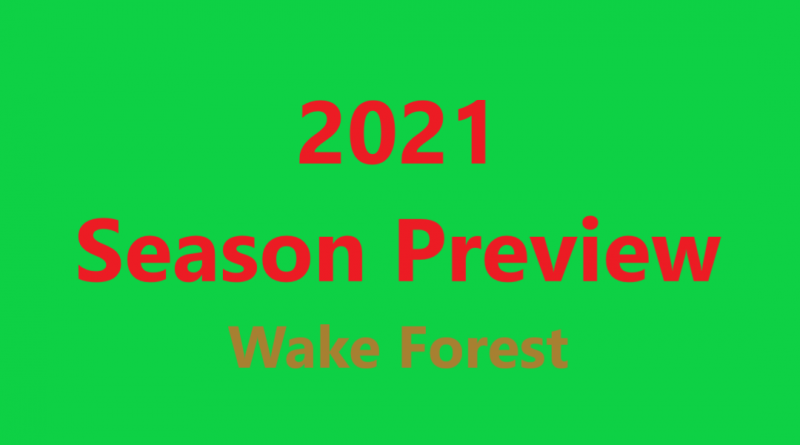 It is tough to start a season directly with conference play, especially when the first game is against #1 Clemson. The Demon Deacons got handled in that game and also lost their next game to North Carolina State in a shoot out 45-42 to start off 0-2.

After that game, Wake Forest got hot though. After a win against FCS Campbell, they knocked off three straight conference wins including an upset of then 19th ranked Virginia Tech. They then went into another shoot out with North Carolina, which they also lost, this time 59-53, after blowing a 21-point lead they had midway through the third quarter.

After this close loss, the Deacons lost their last game to Louisville to finish the regular season 4-4. They will still able to make it the Duke’s Mayo Bowl, which they lost to Wisconsin. Wake Forest finished the season at 4-5, 3-4 in ACC play.

Wake Forest had a strong season in 2020, averaging 36 point per game, and they have a chance to get even better this season. Quarterback Sam Hartman returns after throwing for over 2000 yards and 13 touchdowns last seasons. On top of that, the Deacons top two receivers, Jaquarii Roberson and Donavon Greene, both return as well giving Hartman solid targets to aim at. Leading rusher Christian Beal is back, but will need to do a better job of getting into the end zone after only 5 TD runs in 2020.

The defensive side of the ball is where the major improvement needs to occur to make a step forward in 2021. The Demon Deacons finished in the lower third of the country in points allowed per game. Losing leading tackler Jacquez Williams won’t help, but enough pieces come back that there is a chance for improvement. One area they will need to improve on is forcing turnovers. If they can get the ball back over to their strong offense more often, Wake has a chance to compete better in 2021.

Wake Forest starts off with a couple of games that should be easy wins against Old Dominion and Norfolk State. After those two games, they jump into conference game against an up-and-coming Florida State team. This should give Wake Forest a 2-1 start.

The most intriguing game of the early season will be on at the road at Virginia. The outcome of this game will be a good gauge on how competitive the Demon Deacons will be the rest of the season. With a game at home against Louisville and at a struggling Syracuse, Wake Forest could be looking pretty good going into their bye week.

The hardest part of the schedule for Wake Forest will be a 3 week stretch in early November. It will start off with a road game against North Carolina, that will actually be played as a non-conference game. They follow this up with games against NC State and Clemson. They do wrap the season up with another winnable game at Boston College. If they play tough, it is very feasible to see Wake Forest finishing the season at 6-6 with a chance to play in another bowl game in 2021.