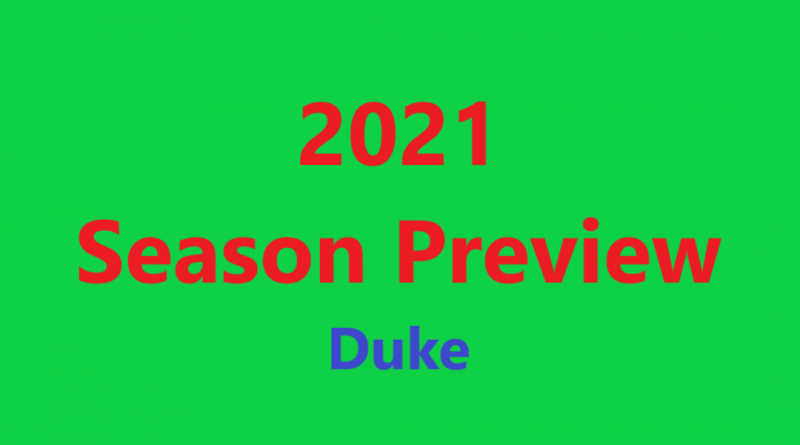 Duke is another team that suffered from not having a normal non-conference schedule to get some easy wins. They started off the season against Notre Dame and actually played them close, trailing by only 4 going into the 4th quarter before eventually falling 27-13. After that game, though, the Blue Devils struggled the rest of the way.  The two bright spots were a win on the road at fellow ACC team Syracuse and a home non-conference win against Charlotte.

After that Charlotte win, the defense just fell by the way side. In the final four games of the year, Duke gave up 56 points in three of them and 48 points in the fourth. The lopsided losses to North Carolina and Miami were understandable but giving up that many points to Georgia Tech and a struggling Florida State team highlighted the team’s struggles in 2020. Duke finished the season at 2-9, 1-9 in ACC play.

Duke did not have a horrible offense in 2020. Other than a goose egg against Miami late in the season, the Blue Devils scored at least 20 points, even in losses, from October through the end of the season. The major issue was turnovers as they averaged 3.5 giveaways per game. Quarterback Chase Brice transferred to Appalachian State during the off season, so the new quarterback will have to improve on his 10-15 TD to INT ratio. This will likely be Gunnar Holmberg who had some limited action in 2020, but will be thrown into the fire this year.

At running back, leading rusher Mataeo Durant returns in the backfield, but teammate Deon Jackson does not. In his place will be Jordan Waters, who had some game time in 2020, which should help bring him up to speed. They will need some stronger play from the wide receiving group though. They did not have a single receiver with over 40 catches in 2020. Who will step up and become the go-to guy for the new starting quarterback?

On defense, a major step up is needed after giving up over 38 points per game in 2020. What won’t help is losing 3 of their defensive linemen. This includes Chris Rumph and Victor Dimukeje who had a combined 15.5 sacks and were both drafted in the off season. Since no other player had more than 3.5 sacks, there is a huge hole to fill. Linebacker Shaka Heyward does return though, after leading the team with 79 tackles. Duke also had 20 turnovers recovered which is quite strong. If they can keep that turnover ratio high, the Blue Devils will have at least a chance in a few more games in 2021.

Duke starts off the season with a fairly reasonable non-conference schedule. They start off on the road at Charlotte and at home against North Carolina A&T, both easily winnable games. The hardest non-conference game will come against Northwestern in Week 3. Finally, they play the Kansas Jayhawks at home to wrap things up. Going into conference play at 3-1 is a very strong possibility.

The reason this is so important is that the Blue Devils conference schedule is pretty brutal, especially with Syracuse off the calendar this year. They start things off at North Carolina, who will be one of the conference favorites this year. The best chance for a win in conference is likely at home against Georgia Tech or on the road at Wake Forest. There is a good chance that Duke will only pull off one conference victory this year in what is always a tough ACC conference. This will give Duke a 4-8 record for the year.