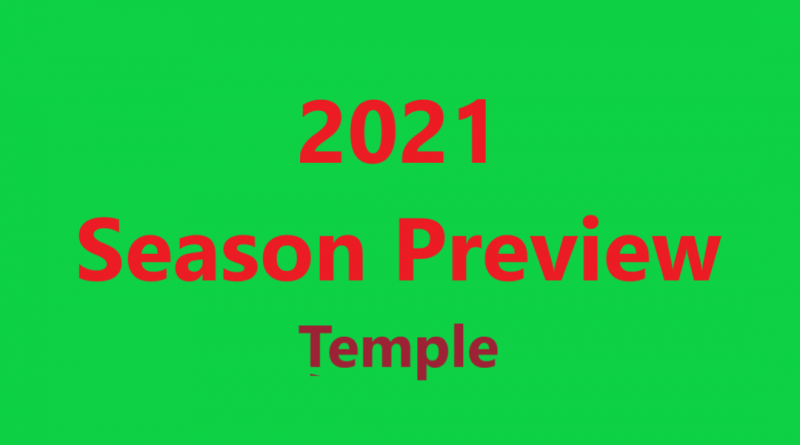 Temple played an eight game, solely conference schedule in 2020. Their first game did not come until October 10th. They actually started off really competitive, losing a close game at Navy by two then winning a close game at home against South Florida to start off 1-1.

Unfortunately, it was all downhill from there for the Owls. They would not win a game the rest of the season. On top of that, they were not even competitive in the rest of their match ups. After a 12-point loss to Memphis they lost their last four games by at least 24 points each. They finished the season at 1-6.

Temple is probably the hardest team to preview for this upcoming season based on everything that happened to them in 2020. They rotated through multiple quarterbacks in 2020 and two of them transferred to other schools in the off season. They have two new transfers coming in to take their place in Re-al Mitchell and D’Wan Mathis fighting for the starting position. The Owls also have turnover at running back, where leading rusher Re’Man Davis has transferred out but two new transfers also come in with Iverson Clement and Ra’Von Bonner. The way these new position players come in will determine if Temple has any chance for success this season.

The defense will need to make similar strides in 2021. The good news is leading tackler William Kwenkeu returns after 49 stops in 2020. There will be a lot of changes on the defensive front though with four starters either transferring out or graduating. This line will have to grow up quick to compete. They will also need some more help from the secondary after only grabbing three interceptions in 2020.

Temple will likely struggle again in 2021. The one benefit of a full season though is being able to play a couple winnable non-conference games. Although they will likely lose games at Rutgers and against Boston College, the Owls can get a couple wins at Akron and at home with Wagner.