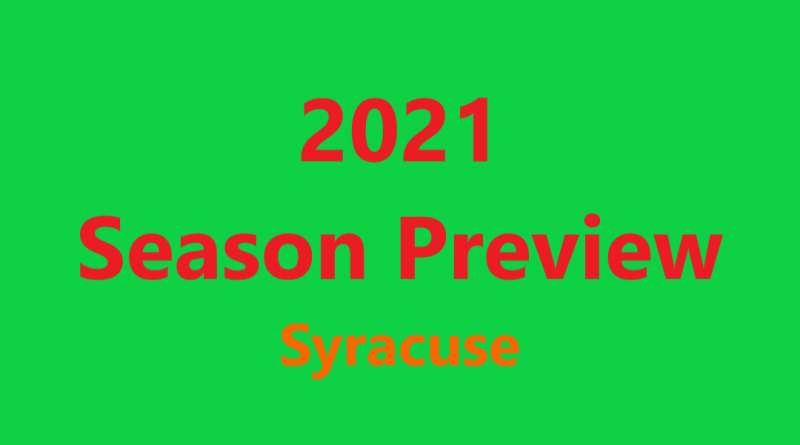 Syracuse tied the school record in 2020 for the lowest winning percentage in a season, going 1-10. Although this was partially because they only had one non-conference game, against a very strong Liberty team, this still is not the type of record you want to be setting.

It didn’t help to start the season playing two ranking teams in North Carolina and Pitt. After that, the Orange picked up their lone win of the season at home against Georgia Tech. The only remaining game that they played within less than 7 points was a 16-13 loss to Boston College in early November. It’s amazing that this team was 10-3 and in a major bowl game just back in 2018.

If you look at what happened in 2020, it’s hard to see any way to go but up. On the offensive side, Syracuse ranked 118 out of 128 teams in points per game averaging only 17.8. The quarterback position is wide open as Rex Culpepper will not be returning in 2021. In his place Tommy Devito could step in, or Mississippi State transfer Garrett Shrader could be the new guy to take charge. At running back, Sean Tucker returns after running for just 626 yards in 2020. Though a lot of that has to do with a weak offensive line. If that line can improve, the running game could become a more impactful threat.

Defensively, the majority of the leading tacklers from last season return. There wasn’t any dominate defensive player, as four different players all had between 60 and 70 tackles last year, but adding another year of experience could be what this young core of players needed. They will have to step up and get the points per game average below the 32.7 they had last season

At first glance, Syracuse’s non-conference schedule does not look too difficult. But that doesn’t mean it’s as easy as it seems. Although Ohio only played 3 games in 2020, they actually looked really strong in those games. Rutgers isn’t a strong team, but I still think they will be favored in their match-up. Plus, let’s not forget how strong Liberty was last season, including a 38-21 win over the Orange.

The conference schedule doesn’t look much better either. There are a couple winnable games in there with home games against Wake Forest and Boston College, but in general, this looks like another struggle of a season in Syracuse. I’m going with a 2-10 record for the 2021 season.