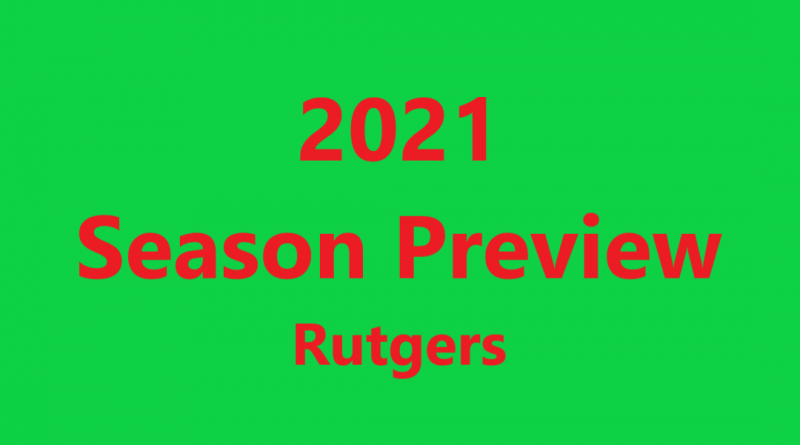 It is going to be hard to properly assess the 2020 season for any team in our reviews. The Big 10 held off until late to even have a season and then went with a conference only schedule. Rutgers is one team that was able to pull off a complete slate of games and actually played 9 conference games. Also of note, Greg Schiano returned as the coach of Rutgers in 2020 after being a very successful coach of the team from 2001-2001, including leading the team to 5 bowls in his final 6 years at the helm.

After an opening season win against Michigan State, the Scarlet Knights got handled easily by Indiana and Ohio State, who were the best two teams in the conference in 2020. After that Rutgers was respectable the rest of the season, going 2-4 but playing close in most games, including taking Michigan to 3OT before falling. Rutgers finished the season at 3-6.

On the offensive side of the ball, running back Junior Isaih Pacheco returns after rushing for 515 yards in the shortened 2020 season. Leading receiver Bo Melton also returns to add a second threat. The biggest question mark will be at the quarterback position. Noah Vedral is back under center, but he had a moderate 2020 at best. Throwing 8 interceptions and only 9 touchdown passes. If Rutgers wants to improve in the 2021 season the touchdown to interception ratio has to increase quite a bit.

To improve in 2021, the defense has to step up and allow fewer points per game. Opposing teams averaged over 32 points a game and gave up 23 or more points in every single game. To lower this average, they will lean on their linebacking core. The majority of the defense does return including Olakunle Fatukasi who was the Scarlet Knights leading tackler in 2020, with 90 tackles.

Rutgers has a chance to have a good non-conference showing in 2021. With Temple and Delaware at home and playing at a Syracuse team that is still likely to be down this season, it wouldn’t surprise me to see Rutgers come out of non-conference play at 3-0. But, wow, that Big 10 schedule is just disgusting! Starting with Michigan and Ohio State is not the ideal way to start off conference play for any team. Add in a strong Northwestern team and playing on the road at Indiana and a likely resurgent Penn State team, it’s going to be hard to find any wins in conference play. The one I could see them pulling out is a home game against Michigan State who is in a rebuilding phase of their own. I’m going to predict 4-8 for the Scarlet Knights.