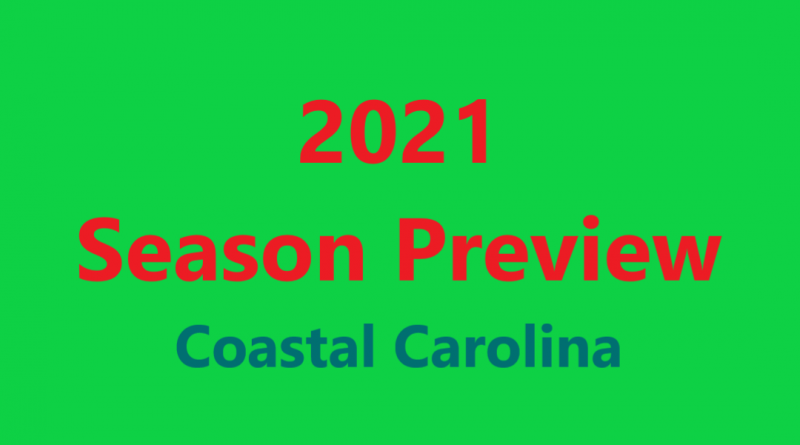 Coastal Carolina was easily the Cinderella school during the topsy turvy 2020 season. The season started off with a 38-23 win over Kansas that they won rather easily. But since Kansas was such a bad Power 5 team most people looked the other way. When they entered conference play, they defeated Louisiana on the road and Appalachian State at home, the two teams that went to the conference championship game the year prior.

The game that finally put Coastal Carolina on the map for the average fan was on December 5th. An ad hoc game was scheduled with BYU to get an extra game on the schedule for both schools. Coastal Carolina won that game 22-17. The Sun Belt conference championship game ended up being cancelled which led to Coastal Carolina finishing with an 11-0 undefeated regular season and being ranked #9 in the AP poll.

The Chanticleers were able to play in the Camping World bowl in Orlando against another surprise team from the year, the Liberty Flames. This bowl game ended up being probably the best of the season with Liberty pulling out the 37-34 win in overtime. Leaving Coastal Carolina with a still amazing 11-1 record for the 2020 season.

Coastal Carolina brings back a majority of their team from 2020 that was extremely balanced on the offensive and defensive side of the ball, ranking in the top 20 for each. On offense, the only major player gone this season is leading running back C.J. Marable. They have two strong backups to step in to that position though. It doesn’t hurt that the second leading runner last season was the quarterback Grayson McCall. He returns for his second year. He comes back after throwing for almost 2500 yards in 2020 with an amazing 26/3 touchdown to interception ratio. If he comes back even more developed in his second year that could spell trouble for their opponents.

The defense brings back a strong core as well, after giving up less than 21 points per game. The only major lose is probably defensive end Tarron Jackson who moved on to the NFL. The key position for the Chanticleers is at linebacker where the three leading tacklers on the team all return in Silas Kelly, Enock Makonzo, and Teddy Gallagher. Between them they had 231 tackles and 21.5 tackles for loss in 2020. They also have a secondary returning that finished with 16 interceptions last season.

The biggest question for Coastal Carolina is can they repeat the magic of 2020 again this season. The non-conference sets up pretty nicely. At first look you might think the hardest game might be a home game against Kansas, but with a new coach and other tension within the Big 12 this season, I think a road game against Buffalo could be the biggest challenge. (The game I will be attending, by the way.) I think Coastal Carolina can come out of non-conference play at 4-0