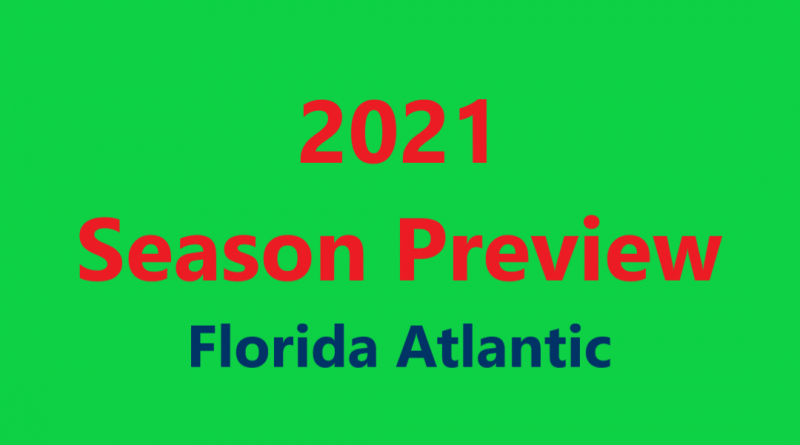 Just like many other schools, Florida Atlantic had a delayed start to the 2020 season. Their first four scheduled games of the season were all either cancelled or rescheduled. This means the Owls did not play their first game until October 3rd. After starting the season with a win against Charlotte, they lost their second game on the road to a Marshall team that was ranked #22 and had rolled everyone they faced. After that loss, however, the Owls would find their groove and win four straight games, including three conference games. The defense was the key to these victories, giving up under 10 points in three of those victories.

After that winning streak, FAU would face another cancelation with their game against Middle Tennessee. That seemed to break any momentum the team had, as they would then lose their final two regular season games against Georgia Southern and Southern Miss. They were still able to make it to the Montgomery Bowl, but would lose that game as well, to Memphis, 25-10 to finish the season at 5-4.

The Florida Atlantic Owls 2020 season was the tale of two extremely different sides of the ball. On one hand, the defense was one of the strongest in the country. They were ranked #10 of 128 teams giving up just over 17 points a game. The offense, though, was very weak averaging just 19 points a game, putting them at 116 out of the 128 teams that played in 2020.

If Willie Taggert wants to see his team approve in his second season the offense will need to pick up significantly. At quarterback, there is a true dual-quarterback dynamic with Nick Tronti returning as the stronger passer and Javion Posey as the running threat, who was second in the team in rushing in 2020. They also have Miami transfer N’Kosi Perry coming in who could overtake both of them. They also have a strong running back transferring in with Johnny Ford coming from USF. If these new players can make plays, this will help Florida Atlantic move up in the offensive ranks.

Defensively, 2020 was defense by committee and almost the entire group returns this year. This should help them keep up the consistency that they already have in place. They are led by linebacker Chase Lasater who comes back after having 72 tackles last season. The one area the defense could improve is in the secondary. Though they were strong at tackling and keeping teams out of the endzone, they ended up with only 6 total interceptions. If they can improve in the turnover game in the upcoming season the sky is the limit for this defense.

The Owls start off the season on the road at Florida, which will start them in a tough place. After that game, there are 3 winnable non-conference games against Georgia Southern, Fordham, and Air Force. If Florida Atlantic can win 2 of those 3 games, that will leave them at .500 going into conference play. In Conference USA there are two really tough games on the schedule with an early game against defending conference champion UAB on the road and division champion Marshall at home. Outside of those two games, every game is at least winnable. Overall, I see Florida Atlantic finishing the season with a 7-5 mark, which should be good enough to get them back into a bowl game at the end of the year.