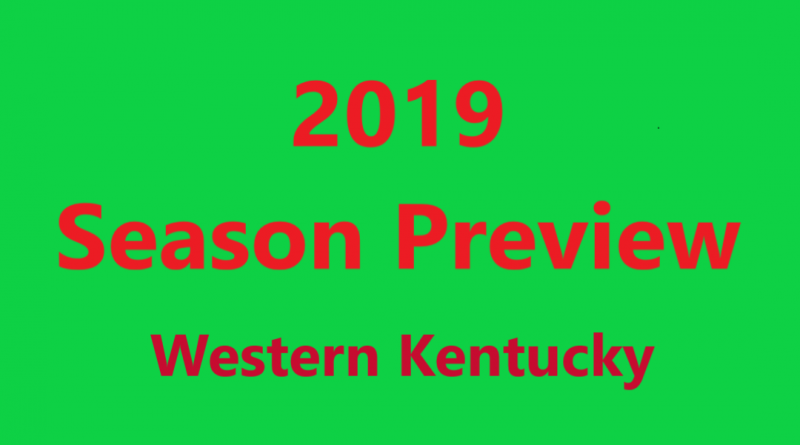 Western Kentucky struggled during the 2018 season, starting with a blowout loss at Wisconsin and a home loss to Maine of the FCS. After gaining their first win of the season against Ball State, the Hilltoppers would start conference play by losing their first six games. They were able to end the season on a small high note though by winning their last two games of the season in wins against UTEP and Louisiana Tech. The main reason for the struggles were on the offensive side of the ball. During the season, five different players led the team in rushing during a game, but the leading rusher never had more than 101 yards in a game. There was inconsistency at quarterback too, with three different quarterbacks leading the team, but only throwing for over 300 yards once. The defensive side of the ball faired a little better. They gave up just under 28 points per game. In fact, in two of their losses they only gave up 20 points, including against ACC opponent and rival Louisville.

Western Kentucky starts off the year with a new head coach. Tyson Helton comes in after being the offensive coordinator at Tennessee. He was a former offensive coordinator at Western Kentucky as well, so brings experience of the program back in. The quarterback position seems wide open going into the year. The two leading quarterbacks from 2018, Steven Duncan and Davis Shanley, both return, along with Ty Storey, a transfer from Arkansas. The entire offensive line returns so that should help whoever wins the quarterback battle with enough protection up front. The key to the offense will be improving the running game, which struggles in 2018. Joshua Samuel, who led the team in 2018, returns, but will need to make big improvements to help keep pressure off the passing game.

On the defensive side, the Hilltoppers two leading tacklers from 2018, Ben Holt and Masai Whyte, are both gone from the linebacker position. The key to the season will be replacing them while staying strong in the other positions. Safety should be a strong position this season with both Devon Key and Tacorian Darden, who tied for third in team tackles in 2018, both returning. A lot of veteran leadership also returns up front to try to shut down their opponents’ running game.

The 2019 schedule looks fairly similar to the 2018 season. They will have tough non-conference opponents in Arkansas, Army, and their annual game against Louisville. As for conference plays, the two teams they beat in 2018, UTEP and Louisiana Tech, are both of the schedule and replacements include UAB, who was the conference champion in 2018. At the end of the day, I just don’t know if there are enough winnable games to make this season a huge improvement in the win column, especially having to start with a new coaching staff. The kickoff against Central Arkansas should be winnable, but that is likely the only non-conference game in the win column. In conference play, a lot of the games could be toss ups, but there are some quality opponents on the schedule. My prediction for the Hilltoppers is 4-8, with a 3-5 record in Conference USA.