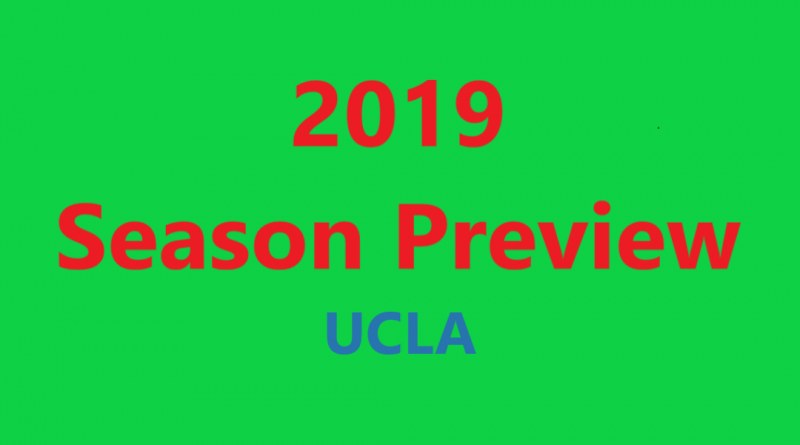 The start of the 2018 season was full of hype and intrigue with the return of Chip Kelley to the college ranks.  Unfortunately, they got off to a horrible start. After jumping out to a 10-0 early lead in their first game at home against Cincinnati, the Bearcats came storming back to win 26-17. After that loss, UCLA would get blown out of their next three games and lose another close one to Washington as well to start 0-5, granted against a very tough schedule.  The Bruins finally broke through against a lowly Cal team to notch their first win, blowing out the Golden Bears 37-7. The highlight of the season occurred on November 17th, when they were able to pull off the win against their crosstown rival, USC, 34-27. That win made the season for the team. UCLA finished the season at 3-9, missing out on the bowl season.

There is hope to get the offense cranking at a higher level for the 2019 season.  After starting the first half of 2018, Dorian Thompson-Robinson suffered from some injuries and was limited in playing time the rest of the year. He returns for his sophomore year, where a year of experience can help in continuing to learn the new offense. The backfield should be a strong spot for the Bruins. Joshua Kelley returns for his Senior year after leading UCLA in rushing the last nine games of the year, including an incredible 289 yards against USC. The rushing game, between the backfield and the quarterback run, will need to be the focus as there is still not a very strong or experienced wide receiving core. Tight end Caleb Wilson, the leading receiver from 2018, is gone, so someone else will need to step up in the receiving game.

The defense is also a big question for UCLA in 2019. With the exception of their blowout win over Cal, UCLA gave up at least 26 points in every other game in 2018. If UCLA wants to make any progress this season, they must be stronger in all areas on defensive. The good news is the linebackers and secondary have many starters returning so that experience should be able to help them out. The defensive line will need to step up though, as they gave up 200 rushing yards a game in 2018.

For the second straight season UCLA has an extremely tough non-conference schedule with games at Cincinnati and at home against San Diego State and Oklahoma. If the Bruins can win one of those three games it would be a huge boost for the season. As for conference play, the Pac 12 is always one of the hardest to predict. Different teams seem to rise up every year.  UCLA should definitely compete harder this year, but they are likely still a year or two aware from competing for a division crown and a spot in the conference championship game. I see UCLA finishing at 5-7 and missing out on a bowl game for a second straight year.