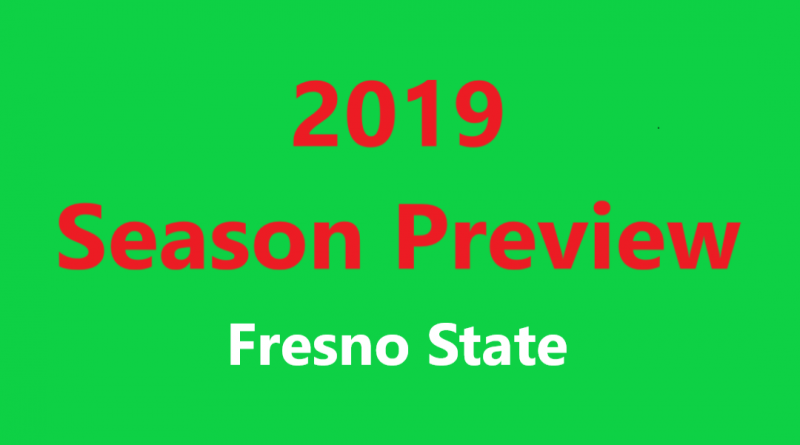 Fresno State had a very strong 2018 season. After a blowout win of recently demoted FCS team Idaho, they traveled to Minnesota for their second game of the year. After taking a 14-13 lead in the fourth quarter, they gave up a go-ahead touchdown and lost 21-14. After that loss, they went on a tear winning 7 straight games by an average of almost 28 points per game. They took that streak to Boise State where they went out to a 17-3 lead early in the 3rd quarter, but gave up 21 points to lose their first conference game of the season. After winning their final 2 conference games, they were able to avenge their lose to Boise State in the conference championship game, this time in the snow. With their Mountain West championship in hand, the Bulldogs went on to beat Arizona State in the Las Vegas bowl 31-20 to finish the season 12-2 and ranked #18 in both the Coaches’ and AP polls.

The key to the 2019 season will be at the quarterback position. Last year’s leader, Marcus McMaryion, has graduated. In his position will likely be JUCO transfer Jorge Reyna, who played some backup time last year but will have to step up to keep the offense running. There will also be some holes to fill at wide receiver. The bulk of the running back core will be returning from last season though, so that will provide a starting position for the offense.

On the defensive side of the ball the position that needs the most rebuilding is the linebacking core.  If they are able to do that, there should be enough returning on the line and in the secondary to keep the very strong defense from last year humming along.

Fresno State has a pretty tough non-conference schedule starting off the 2019 season, which is probably beneficial because the conference schedule looks pretty weak.  They start off the season with two Power 5 schools in USC and Minnesota. I think USC will probably be too tough for them, but can see them picking up the win over Minnesota at home. As far as conference play, the only games I can see giving them a challenge are Utah State and, perhaps, Nevada, but they get both of those games at home. I see them finishing 11-1, winning their division and moving on to the conference championship game against either Boise State or in a rematch with Utah State.  If they are able to win the conference championship, they could be in a good position to challenge for the Group of 5 berth during bowl season.