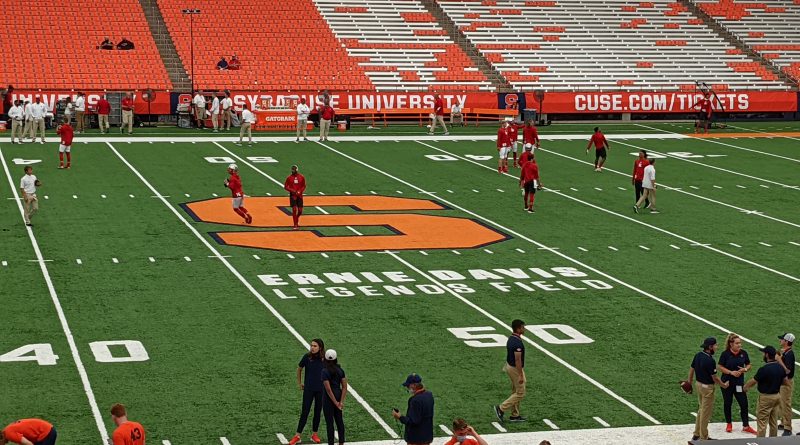 These two teams both struggles in 2020, though each won their week 1 game. I was interested in seeing how these two teams would look in this Power 5 matchup after playing inferior opponents the week prior.

In a word, this game was UGLY. Neither team was able to put anything together. On the first drive of the game Syracuse had their punt block setting up Rutgers in great position. Rutgers took over and quickly got an offensive pass interference call, followed by a sack leading to zero points be scoring. Syracuse followed that up with their best drive of the half only to fumble the ball away. This led to a scoreless tie at the half.

Scoring finally started in the second half. After offsetting penalties, coach Dino Babers argued his way to an unsportsmanlike penalty and Rutgers scored on the next play to make it 7-0. Syracuse immediately scored back three plays later to make it 7-7.

Rutgers was able to put a little more offense together scoring another touchdown and field goal. Syracuse’s woes continued with a fumble immediately after a Rutgers’ missed field goal and an interception towards the end of the game. The Scarlett Knights were able to put this one away to start the season at 2-0 while Syracuse fell to 1-1.

The Carrier Dome just completed some major renovations. Because fans were not allowed in 2020, this was the first game for the public to come and take in the new changes. From everything I have read the changes were very much needed and everyone seemed to really like the upgrades.

In New York state, you were required to either be vaccinated or have a negative Covid test within the past 72 hours to attend a major event indoors. They had several tents throughout the campus and parking lots where you were provided a wristband if you were approved to enter. I went pretty early in the day and there was no line at the time I received my wristband. I feel like they did a good job with this process.

This was the first indoor stadium to attend a game in. They had the air conditioning going pretty hard as I was actually a little chilly. The stadium was probably 70 percent filled, but the student section was out in full force, which makes sense being it was their first game to attend in two years. They were loud and making noise the entire game. I was very impressed by them.

The concession area was very interesting. I am not sure how many of these changes were just because of the renovations and how many were because of the pandemic, though I’m guessing a bit of both. In each outer corner of the concourse there was either a Cuse Chicken Express of a Loud House Grill. In each of these locations, you grabbed the food you wanted, scanned a bar card on the item, then paid with a card. The entire process was touchless and cashless though there were people there to assist as needed. When I went through the lines were small so the process was easy, but I’m curious how well the lines flowed once the crowds increased.

It was a beautiful evening outside so enjoyed being able to head out to this women’s soccer game when I got into town. Since Cornell is nearby in-state school, quite a few parents of the Cornell players made the drive up and attended the game making the crowd livelier. I would say there were a couple hundred people in attendance to watch.

I do not watch much soccer on television other than the World Cup, but will say that soccer is definitely more fun to watch in person. You wouldn’t think a game with no goals scored would be very exciting, but it turned out to be a lot of fun because you never knew if someone would score a goal that would end up winning the game. Since Syracuse had a much better record you kept expecting them to put something together, but every time Cornell made a run you got excited that they might be able to pull the upset.

In the end, both defenses won the day and the game ended in a scoreless tie.

Syracuse was the most Eastern state I have visited on my journey so far and it led to seeing some beautiful architecture on a lot of buildings around campus. The campus itself is in the urban area of town leading to a compressed campus area.

There were two buildings that were probably my favorite. The first was the Hall of Languages. This is the building that was up a set of stairs coming up the main pedestrian corridor on campus. There was a clock tower on it as well and it is just a perfect setting as people step onto campus for the first time.

The second building that was just beautiful was Crouse Hall, which is home to the main music auditorium. The building has a castle look to it and sits on top of a hill making it look quite majestic. Some people have nicknamed it Hogwarts for its resemblance to the castle in Harry Potter.

One more really neat area of campus is just inside the Heroy geology building. If you walk inside the main doors, you will see a huge lighted globe above the entrance. It also spins around giving a fun view as you walk through the building.

Overall, these were just a few of the fun spots to take in on campus. Even the Carnegie library was one of the prettiest libraries I have seen at a university. If you ever come to a game in Syracuse, take the extra time to walk around campus before the game and enjoy the sights.

Onondaga Lake Park is a large park situated on the east side of Lake Onondaga. There are a lot of walking trails, playgrounds, and a large skate park. The weather on the day we visited was perfect, make a walk along the lake shore very relaxing. There were a couple of piers where you could stop and take pictures of the lake.

One of the original reasons I chose to visit this park was to check out the salt museum as Syracuse has a long, storied history with the salt industry. Unfortunately, the museum closed after Labor Day so I was not able to visit as I had hoped. Still, the weather and lake still made it a fun place to check out.

Northern New York is very proud of the work they put into the Erie Canal. After the federal government turned down the financial effort needed to put this project into motion the state of New York got behind it and funded it themselves. The Erie Canal museum in downtown Syracuse is a place that showed tribute to that effort. Part of the museum is actually is actually inside one of the weighlock buildings. These buildings are where ships entered and were able to either be pushed up or down into the next section of the canal.

The museum itself had a lot of fun artifacts. They have some displays that do a good job of showing the history of the canal as well as explanation of how the canal worked through interactive displays. They also had some exhibits upstairs that showed some history about the town of Syracuse overall. In whole, it was a nice museum that is work an hour or so of your time.

After previously visiting Lake Michigan in Chicago and Lake Erie in Cleveland, a trip to Lake Ontario while driving from Syracuse to Niagara Falls was a nice stop. We stopped in a small park in the small town of Sodus Point, about 45 minutes East of Rochester.

The highlight of this park was the Sodus Bay lighthouse. This lighthouse was at the end of a long boardwalk that went out from the lake shore. There were a few people walking along the boardwalk, but it was a pretty small crowd. There were plenty of birds along the boardwalk as well. It appeared to be a lot of festivals and other activities that occur in the park during the summer, but things were being shut down post the Labor Day holiday.

I had read a lot of good things about Dinosaur BBQ and I hoped to check them out, but the two times driving by their building downtown the place was packed with no parking space to be found. As a backup for the BBQ craving, I chose the Bull & Bear near the Syracuse airport. They claimed to be known for their BBQ as well.

I tried their sliced brisket sandwich with a side of tater tots. The sandwich was topped with caramelized onion, provolone cheese, and a BBQ sauce. The flavor was there, but it seemed like the char on the outside of the brisket was too much. It caused the flavor of that char to stick out more than the other flavors of the sandwich. Very disappointing for a place that claimed they were famous for their BBQ. The tater tots were very good however, and were served with a chipotle ketchup that had a lot of flavor.

One of the interesting things about Syracuse is how the streets are laid out. We had a pizza craving and found Twin Trees Too as a sports bar that specialized in pizza. It seemed to be located right in the middle of a neighborhood which made it seem more homey. The wait staff seemed to know a lot of the customers by name which even added more to that sentiment.

Being famous for its pizza, I had to get a small pizza with sausage and onion, my usual go to.  They cut the pizza into 8 smaller rectangular pieces instead of the usual slices you get. The pizza had a nice flavor and the crust was cooked evenly and not too crispy. Although the first bite did end up burning the roof of my mouth which ended up lasting for a couple days afterwards as well.

On our way from Syracuse towards Niagara Falls we made a stop near Rochester to try one of their famous ‘garbage plates’. The garbage plate was made famous and trademarked by Nick Tahou Hots in the downtown area. We stopped at Charlie’s in the suburb of Webster for their version, called the Charlie plate.

The name is apt for what you get. In its normal form, it is a plate of macaroni salad and home fries that is topped with either two hamburger patties or two hot dogs. If that isn’t enough, it is then topped with chili sauce and any other toppings you would like. I got mine with mustard and onion.

I wasn’t sure how all these different items would mix together but it was actually very good. The macaroni salad had a ton of flavor and the home fries were cooked just right. The chili had a decent amount of heat to add to the overall dish as well. The only problem with the dish was that it was too much food for one person. I was not able to eat all of the food that was in the meal. But I think it would be perfect dish to eat as leftovers if you were able to take part of it with you to go.

This is definitely not a meal you would want to eat very often from a health perspective, but for a splurge meal every once a while this dish was a lot of fun and definitely something unique.