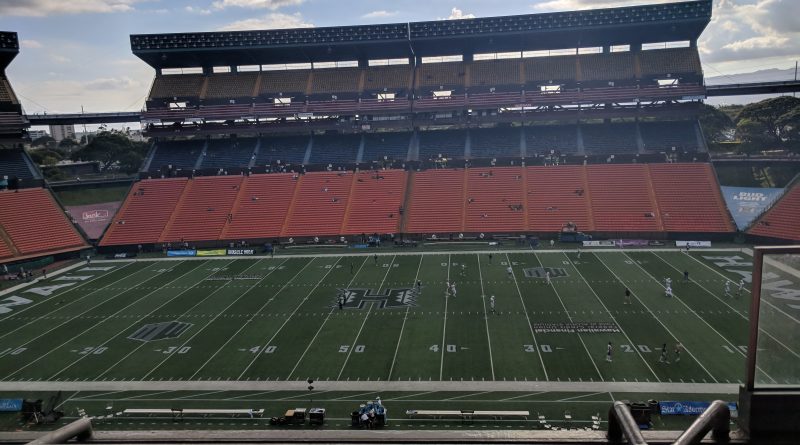 This ended up being a very exciting game. Hawaii came in with a 2-0 record and coming off a big win over Navy at home. Rice was 1-1, coming off a loss to cross-town rival Houston, where they competed but fell.  As in prior games, Hawaii went out to a big lead thanks to a dynamic offense. The run and shoot is back!

But Rice would come back in the second half to make it competitive. After trailing 28-13 at the end of the third quarter Rice scored a safety then took the ensuing punt down for a touchdown to pull within 28-22. Hawaii then did just enough the rest of the game to win 43-29.

Aloha Stadium is probably best known for being home to the Pro Bowl, but it is also the home stadium for the University of Hawaii. I am not a big fan of stadiums that are off campus, but in general I felt this stadium worked. Aloha Stadium holds up to 50,000 people. For the game, the upper decks on the North and South end zones were both empty. The upper decks on the sidelines were probably about 20% full, while the lower bowl was probably around 40% full. Even with a stadium under half full, the fans at the game were very enthusiastic and into the game. I’m sure being undefeated going into the game helped as well.

The stadium as a whole was a little worn down. You can tell it has been a while since there has been some major maintenance done. There has actually been talks over the summer about building a brand new, smaller stadium in the future. They had a moderate sized video board over the North end zone and a basic scoreboard over the South end zone. There was nothing over the sideline areas. There were a couple nice things about the stadium though including having individual seats instead of bench seating, which made the seats very comfortable. Also, one thing I found very cool was the open areas they had on a couple of the concourses. They had tables where people could sit and eat and they also had a live band playing before the game.

The stadium sold a lot of concessions that had a very Hawaiian flavor. They had a lot of stands that sold Hawaiian plate lunches. They also sold beer throughout the stadium. And, for some reason, they sold Greek gyros as well, which did not seem to make as much sense.

For my non-football sporting event I attended the women’s volleyball match against San Diego State. This was the finale of the Outrigger Volleyball Challenge event. I came away extremely impressed at how popular volleyball was here. The event was held at the Stan Sheriff Center on campus, which is also home to the men’s and women’s basketball teams. Almost the entire lower bowl was full and the upper bowl was around 50% full. The fans were very much into the action and were able to watch Hawaii win in 4 sets (25-21, 25-17, 19-25, 25-17). The Stan Sheriff Center was a very nice venue.

My first thoughts of campus were driving past to the dorms to one of the visitor parking garages. I first noticed how many mopeds were being driven. I don’t think I had seen so many mopeds at one time. Beyond that, the campus did not have a feel of a big college campus. As many of the other buildings in Honolulu, a majority of the buildings were open aired buildings. The union building also felt a little dated. On top of that, the fact that it was near 90 degrees with a very high humidity made it very uncomfortable, especially with many places not having air conditioning.

Waikiki is the main tourist beach on Oahu. I stayed at the Hilton Hawaiian Village resort right on the beach. As you can imagine, as the home of all the major resorts on the island, the beaches here were very crowded. There was also a lagoon area where you could rent paddle boats and other items that you could take out to enjoy the water. Since I prefer more quiet venues, I did not spend too much time on the beach here, but there is plenty to do and enjoy if that is more your style. There is also plenty of restaurants and shopping up and down the beach to enjoy as well.

I try to visit every state capitol when I get the chance. Unfortunately, the building itself was closed when I was there. The building itself is pretty unassuming, you would never know it’s a capitol from the outside. It also had an open architecture, as many buildings in Honolulu had.

Before Hawaii became a U.S. Territory, it actually was a monarchy with a king and queen. The last of these monarchs lived in the Iolani Palace, located just South to where the state capitol building was built. The tour of this building was quite lengthy, but gave a great history of the islands before it was a state.

Kailua Beach is on the Eastern shore of Oahu and was by far the highlight of my trip. I left about 5:30 in the morning to make sure I was able to get to the beach in time for the sunrise. Though there were too many clouds to get a perfect sunrise, it was still very relaxing and very beautiful. After the sunrise I made a quick walk to the Kalapawai Market just a couple blocks away. Along the way it briefly rained on me, but as I left the store, an absolutely gorgeous rainbow went across the whole sky.

This was a nice little hike on the Southwest side of the island. The walk up to the lighthouse was mostly uphill so it did take some energy to make it all the way up. It was about a 30 minute hike up. But once you got to the top, the views of the island were amazing. The hike is named after one of the lighthouses that was up at the top of the hill.  This would be another amazing place to watch a sunrise on the island if you’re able to climb to the top before the sun comes up on the horizon. There is limited parking, so you will want to do this climb pretty early in the morning to try to beat the majority of the traffic.

Kaena Point is the most Northwestern point of the island of Oahu. Getting to this point required an approximate 2 mile walk from the parking area to get to the actual point. It is protected by gates because it is a nesting area for some rare birds as well as endangered monk seals. The walk was a bit difficult, not because of the heat, but due to the humidity. In the end, it was still worth the trek. I was able to see a seal lounging along the shore line. The shore line on the North shore also a lot more active with much harsher waves. There were very few people around the area which made the beach very relaxing. If you do not mind the hike to the point and back and enjoy seeing a more active coast line, this is worth the trip.

The Byodo-In temple is located along the base of one of the mountains near Kahaluu. It is a Buddhist temple that a part of a memorial garden. It is a replica of a 950 year old temple in Japan. Along with the temple there was a reflecting pond and two black swans that were donated to the area. It was a relaxing place, but it was quite a bit smaller than I was expecting.

This was my venture into trying an authentic Hawaiian plate lunch. A Hawaiian plate lunch is a meat that comes along with two scoops of rice and a scoop of macaroni salad. I went with the mix plate that came with BBQ beef, boneless chicken, and a fish fillet. It was a very popular place with long lines, but wasn’t overly impressive. In full disclosure, my original plan for my authentic Hawaiian meal was going to be Helena’s Hawaiian food. But even going there super early (By 10:30 AM) was met with a very large amount of traffic that made it a little too difficult to get to with extremely limited parking.

Malasadas are a puff pastry that are very famous in Hawaii and Leonard’s bakery is one of the best places for them. I went very early on Sunday morning before the rush and tried an Original as well as a custard filled. They are both served warm and coated with lots of sugar. They were very tasty, and a very good place to stop for a quick breakfast on the go. 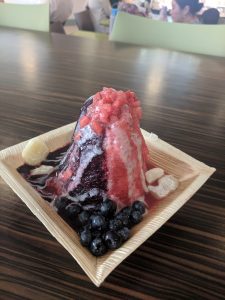 I did not know what constituted Hawaiian shaved ice until I tried it. Basically, it is a bowl of soft serve ice cream that then has shaved ice packed all around it. Then the various toppings are placed on top. I went with the Super Island, which had acai, strawberries, and blueberries. This was delicious. I wasn’t sure if the ice on top of the soft serve would work, but it ended up being a great combo. This is something everyone should try as a dessert while in Hawaii.

Giovanni’s is a very popular food truck on the North shore, in the city of Haleiwa. It was located in a food court area with four or five other trucks, and the parking lot was packed. What was funny, is the only truck with a line was Giovanni’s, and the line was very long. They are famous for their many varieties of shrimp. I choose the shrimp scampi along with a side of macaroni salad. I’m not the biggest shrimp fan, but the scampi had some very good flavor. I would recommend it to anyone spending the day on the North shore. 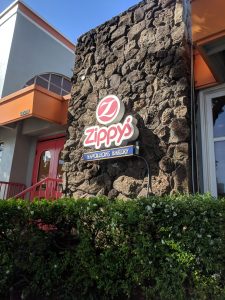 The best way to think of Zippy’s is as the Hawaii version of Denny’s. It was an interesting place, because they have a fast food counter in the front, but also an actual sit-down restaurant in the back of the same building. I was not aware of this until I had already ordered my food up front. They served a variety of Hawaiian staples, some that are always available, while others are daily specials. I chose the turkey a la king. Turkey and vegetables on top of a bed of egg noodles. Nothing to write home about, but still a place to visit while in Hawaii, especially if you’re in a bit of a hurry. 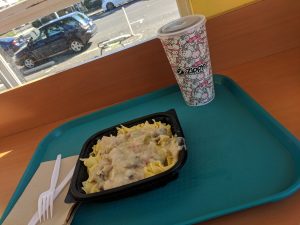 This sums up a Hawaiian food perfectly. Spam musubi is a rice roll that is topped with a slice of Spam and then wrapped in seaweed. This concoction is best purchased from a local convenience store in order to have the true authenticity. I purchased mine at one of the stores on-site at the Hilton resort. Honestly, I had no idea what to expect from this, but it ended up being very tasty! The combination of rice and Spam actually works out very well!